Throwback Thursday: Why was the Beatle's gay manager smirking at Wayne Fontana on Hullabaloo? 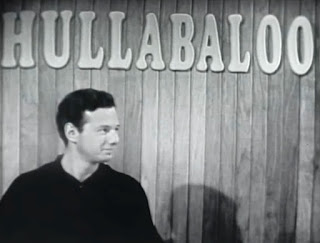 We can't read Brian's 1965 mind, but it probably had something to do with the lyrics of The Game of Love, a smash that reached #1 on the U.S. Billboard Hot 100 the week of April 24, 1965.
The clever director cut to Epstein just as Wayne Fontana began to sing: "The purpose of a man is to love a woman and the purpose of a woman is to love a man."
This was probably uncontainably amusing to Epstein. (Epstein once asked John Lennon what he thought his book (Epstein's bio, A Cellar Full of Noise) should be called. Lennon suggested "Queer Jew." Later, Lennon changed his mind and said the book should have been called A Cellarful of Boys." Note to right wing cranks: Epstein was not a pedophile and that isn't what Lennon meant.)
Fontana (né Glyn Geoffrey Ellis) could be a handful. From Wikipedia:


In 2005, he fought off bankruptcy but was arrested after police were called by bailiffs who went to his home in Glossop, Derbyshire. He poured petrol on the bonnet of a bailiff's car and set it alight with the bailiff still inside. Fontana was remanded in custody on 25 May 2007. He later appeared at Derby Crown Court dressed as Lady Justice, complete with a sword, scales, crown, cape and dark glasses, and claiming "justice is blind". He dismissed his lawyers. On 10 November 2007 he was sentenced to 11 months for setting fire to the car but was released because he had already served the equivalent of the term, having been held under the Mental Health Act 1983. After his release he settled in Spain.

Below: the best audio you will ever hear of this song. Use headphones. The camera cuts to Brian Epstein at 1:45.