“Our relationship of trust was completely destroyed,” Yoshimura said, according to the Asahi Shimbun. “I will dissolve the sister-city relationship.”
...Despite attempts to block the installation of the statue from the Japanese Consulate in San Francisco and a concerted email campaign from Japanese nationals, the statue was erected in St. Mary's Square on Sept. 23.      ...At a news conference Friday, Japanese Chief Cabinet Secretary Yoshihide Suga said that the San Francisco statue and others like it were “extremely regrettable” and that Japan would “continue making every effort so that things like this won’t happen again.”
However, the activists behind San Francisco's statue have said that the response to its installation angered them. “I think it's a shame,” Julie Tang, a retired San Francisco Superior Court judge, told the San Francisco Chronicle on Friday. “They’re turning history on its head. Yoshimura is turning this into a geopolitical issue. It’s not. It’s a human rights issue. This is a global women’s issue to fight against sexual violence and using women as sex objects as a strategy of war.”
The Japan Times reports that some politicians in the Osaka city assembly also were concerned that Yoshimura's actions could harm the city's reputation abroad, and petitioned him to find a solution through dialogue.

Three Nebraska communities have sister city ties to two Japanese cities: Arapahoe and Hastings with Ozu and Omaha with Shizuoka.
Nebraska's first international office, the Nebraska Center Japan, opened in Yokohoma in 2006 and is the main point of contact for Japanese businesses looking for business opportunities in Nebraska.
It is led by Koji Nagasaka, who serves as executive director of the office. Nagasaka-san leads a team promoting Nebraska’s products and services and connects Nebraska businesses with Japanese companies.
Posted by Enzo No comments: 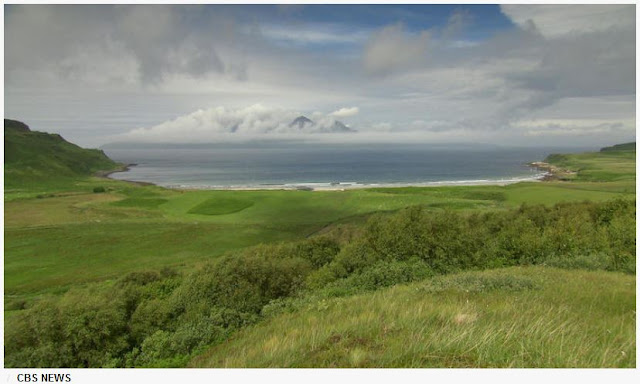 
None of these younger people would be here without the island's tiny, but unique power grid that runs almost entirely on renewable energy. A combination of wind, hydroelectric and solar, the first time it's ever been accomplished anywhere.
Maggie Fyffe: That is the biggest and most impressive project that we've done.
Steve Kroft: It's changed everything, right?
Maggie Fyffe: Oh, yeah. It's made life so much easier.
It was designed and funded with multiple grants mostly from the European Union and engineers from all over the world have come to study it. Like everything else on Eigg, it is run and maintained by revolving committees of islanders, the only visible sign of any sort of government.

At today's meeting of the Nebraska Public Service Commission, the three members who ok'd TransCanada's eminent domain march through Nebraska to the BP-fouled Gulf of Mexico did not articulate a single reason for their approval of Keystone XL.
Those members were Tim Schram of Gretna, Frank Landis of Lincoln and Rod Johnson of Sutton.
Johnson had issued a toothless written admonition: he "sternly warned" TransCanada, according to the World-Herald, about its many promises, "including that the Keystone XL would be the safest pipeline in history, and that all farmland would be restored."
“Nebraskans are counting on that,” he wrote, presumably with an unspoken threat that he would gum TransCanada to death if it misbehaves.
TransCanada's recently-built Keystone 1 leaked 12-14 times in its first year depending on how you define "leak." Last week it poured 210,000 gallons of carcinogenic oil and associated solvents into a field in neighboring South Dakota.
We use the word "oil" loosely. It's actually dilbit (diluted bitumen, or tar sands slurry) which is like liquid sandpaper on pipes. It has to be heated up to 160 degrees to flow, must be thinned by carcinogenic solvents like benzene and other stuff TransCanada won't disclose and it must be pressurized up to 1600 PSI. (Sweet crude from Saudi only needs about half that much pressure.)
Because dilbit is technically not oil, TransCanada, nice company that it is, refuses to pay 9 cents per barrel into the Oil Spill Liability Trust Fund.
Unlike the men, the two women on Nebraska's Public Service Commission ixnayed TransCanada's application: Mary Ridder of Callaway and Crystal Rhoades of Omaha, the personal choice of former Public Service Commissioner pitbull Anne Boyle, whom Rhodes replaced on the commission in 2014.

Rhoades, the only PSC member to comment at today's hearing, had plenty to say before she voted no. We have transcribed her remarks below. KMTV, Omaha's CBS affiliate, put the entire Public Service Commission meeting (eight minutes!) on Youtube. Said Crystal:


I'm going to be voting no on this application for the following reasons:
1. The route violates the due process of landowners. There are at least 40 landowners along the approved route who may not even know that their land is in this pipeline's path. Since they may not know that they are in the path of the pipeline, they may not have participated in this proceeding and may not have had an opportunity to make a case before this commission.
2. The federal and state agencies conducted studies of the proposed route, but the route that's being approved here today is a different route, quite simply. The mainline alternative route was not the focus of that intense study.
3. While the routes have moved off of the official map of the Sandhills, both routes, both the preferred and the mainline alternative route still run through several miles of fragile soils that have a high probability of landslide and will be difficult to restore, once they are disturbed.
4. The mainline alternative route crosses the Ogallala Aquifer in Nebraska.
5. The applicant provided insufficient evidence to substantiate any positive economic impact in Nebraska for this project. No contracts have been entered into by Keystone or TransCanada with any Nebraska Labor Union or with any contractor. There was no evidence provided that any of the jobs created by the construction of this project would be given to Nebraska residents. The short-term increases in property taxes collected will not offset the losses to the overall value of the land through which this major oil pipeline runs. Further, the limitations in the orderly development and operations of the affected land will result in a loss of land value from the limitations. The Nebraska Department of Revenue could not conclude that this project would have a positive tax impact for Nebraska.
6. The applicant admitted that it had not spoken with the Nebraska native tribes. The applicant reported, according to DOS that they had worked with the Southern Ponca Tribe, who reside in Oklahoma, not in Nebraska.
[7.] And finally, another utility corridor exists that could feasibly and beneficially be used for this route. The applicant did not prove that twinning or co-locating the Keystone XL pipeline with the Keystone 1 pipeline in eastern Nebraska was not feasible and beneficial. Rather, Keystone stated it was not their preference to use that corridor. The applicants did not refute the landowners' argument that using the existing Keystone 1 corridor would avoid fragile soils, reduce impacts to endangered species and avoid widespread controversy and opposition to this project.
For those reasons, I will be voting no.

A second Omaha antiLGBT pastor gets busted in a sex scandal

Another of the 200+ Christian signatories (#120) to an expensive 2012 Omaha World-Herald ad opposing equal protection for Omaha LGBTs has been arrested in a sex scandal, for allegedly screwing a 15-year-old female sex trafficking victim. WOWT had this to say:


Klint Bitter turned himself in at the Sarpy County Jail Tuesday. He's charged with first-degree sexual assault of a child. The 34-year-old allegedly answered an online ad posted by a sex trafficking suspect in Bellevue.
Bitter was a pastor of kids and student ministry at Christ Community Church near 108th and Harney. Church officials said Bitter has been fired from that position.

Mr. Bitter is now conjoined in infamy with Pastor Brad Hoefs, who was cited in May 1995 by Officer Not-THAT-Friendly, of the Omaha Police Dept., for exposing himself and masturbating, either in front of or next to two men by a parking lot at Lake Cunningham Park.
Sadly this caused King of Kings (a West Omaha megachurch) to cut him loose him as pastor.
However, he was cut considerably more slack by Community of Grace Lutheran Church in Elkhorn, which hired him and which is where he "pastors" now, despite having been cited AGAIN in 2002 in the same park for the same behavior, presumably by a different OPD undercover officer.
(Dude! Look for cop shoes; undercover flatfoots often don't change them when they go homo-hunting for either entrapment or preserving the decorum of parks so that the little kids who frequent them at 3 a.m aren't traumatized by tableaus straight out of their dad's or uncles's or brother's gay porn.)
After Grace declined to cashier Hoefs after Park Perv Pastor: The Sequel  he became a state-certified Intentional Peer Support Specialist (?) and was appointed by former Governor Heineman to serve on the State Advisory Committee on Mental Health Services.
Here's what Brrrrradley had to say about the incident:


After experiencing a bipolar relapse in 2002 Brad knew it was time to start attending a support group since lack of knowledge about his disorder was at the core reason for his relapse.

"Bipolar relapse" is one way of putting it. Bisexual relapse might be another, if bisexuality were a mental illness, WHICH IT IS NOT, OK? Also, why evoke Polar Bears, who have enough trouble, what with global warming and EPA dirtbag Scott Pruitt?
Brrrradley has been married to his "high school sweetheart," Donna for 34 years. (AKSARBENT is not even going to ask what HER deal is, we'll just remind our long-suffering readers that her sporadically-devoted husband Hoefs was signatory 19 on the anti-LGBT-rights Heritage Coalition ad.)
Bonus: Omaha's very own Death-to-Gays Pastor, Philip Kayser, also signed the ad (#183).