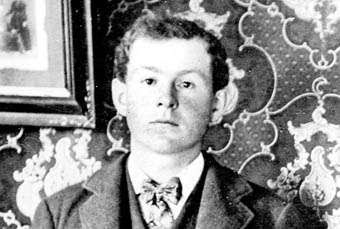 Bachelor farmer August Meyer, 1887-1958, pictured some years before the son of an acquaintance, Guy Starkweather, shotgunned him in the head. Meyer used to let Starkweather and his boys hunt on his farm near Bennet, Nebraska, outside Lincoln.

This week, the Omaha World-Herald twice has milked the 50-year-old Charles Starkweather murders on its front pages (in Thursday's 6/25 teaser and Sunday's 6/28 full treatment.)

The paper last splashed the Starkweather spree killings across its pages on Sunday, December 2, 2007. Three days later, one of its readers, Robert Hawkins, took his dad's AK-47 to Von Maur, in Omaha's Westroads Mall, and gunned down 13 people, eight of whom died.

Those killings made national headlines and sold a lot of World-Heralds. Add extra coin from the obituaries, and a big damage-control display ad from Von Maur's PR people, and who knows — maybe recklessly revisiting local serial killings could turn into a nice little side business goosing the World-Herald's flagging revenue stream. Take that, Craigslist!

For now, one can only wonder if lightning will strike twice for the Herald; that is, whether or not its two latest circulation-building, front-page excursions into violent, non-newsworthy and dated sensationalism incite more bloodlust from any of the least sane of its readers.

(P.S. For the love of Mike, I implore anybody reading this who might know of some connection of Lizzie Borden, John Wayne Gacy, Jeffrey Dahmer, etc. to Nebraska or Omaha, no matter how tenuous, to please refrain from telling anyone at the World-Herald.) 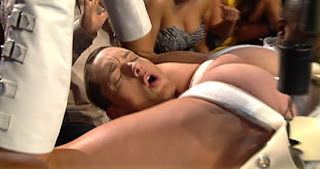 OH MY — JUST LOOK AT THE OUTRAGEOUS THINGS WE MISS WHEN WE DON'T WATCH THE MTV AWARDS! SUCH A SCANDALOUS ACCIDENT!
One would like to believe that Eminem finally got what was coming to him, but in order to do so, one would also have to believe that he had no knowledge of this stunt, which involved an "accidental" teabagging incident involving Sasha Cohen's "Bruno" character. Viacom has removed the inevitable uploads to youtube, but I found a copy here.
Posted by Enzo No comments: