LoessFest brought Frankie Valli to Council Bluffs, IA along with whatever incarnation of the frequently-reconstituted Four Seasons is currently shaking.
Nobody with any sense believes that Valli isn't lip synching these days. There's even a clip on YouTube of Valli's digital helper going into a loop and of him finally walking off stage—no one, apparently, could shut the thing off.
Said Barry Lewis in New York's Hudson Valley Times Herald-Record:


"A story in the Columbus Dispatch in 2011 also had concertgoers accusing Valli of faking it on stage. In that same story, his manager denies the charge, saying “Frankie Valli sings every note of the show.”
Sure, but what year did he sing those notes?"

But we don't care about alleged lip synching at a free concert. (What would we do? Sue for the cost of our tickets?)
We came to see tweaked arrangements of our Top 40 faves and were not disappointed. Live (the backup Four Seasons replicants were live, anyway) the Four Seasons' evergreens are fresh and just as infectiousness as the first versions.
Whoever tastefully re-arranged these hits absolutely know what s/he was doing. In fact, the original Sherry recording would be improved by the exquisite accent of the brief a Capella harmony in the opening bars of the live performance. The live version of Stay now includes a wild jazzy instrumental passage that is terrific.
We love Four Seasons songs. So does America. BMI says Can't Take My Eyes Off You is the fifth most broadcast song of the 20th Century. (Technically it's not a Four Seasons song, but Bob Gaudio (a Season; maybe he was summer) wrote the music and the group's record producer extraordinaire, Bob Crewe, wrote the lyrics.)
Longstanding rumors say Crewe finished the lyrics while watching his boyfriend sleep. (Please don't tell that to any Joey Six Packs like those in The Deer Hunter, where blue collar etiquette dictates that if you've had too much Bud and plant one on on a bud during the "I love you baby" refrain, he is obligated to respond by calling you "faggot.")

The New York Times asked Crewe's brother, Dan, about the sleeping boyfriend/muse rumor, in a roundabout way, and got shut down:


Mr. Crewe was gay, and his brother, his only survivor, said he was discreet about his sexuality in many of his social circles. He noted that in “Jersey Boys” Mr. Crewe was portrayed as overtly gay, but in real life that was not the case, Mr. Newman said, particularly during the period when he was working with the Four Seasons. Promotional material for Dynovoice Records quoted a female singer fawning over Mr. Crewe’s handsomeness.
“Whenever he met someone, he would go into what I always called his John Wayne mode, this extreme machoism,” Dan Crewe said.
That fact that Mr. Crewe wrote so many songs about women reflected the complicated culture of his era as well as his shrewd professionalism, his brother said. Asked if some of his songs had been inspired by male romantic interests, Dan Crewe said: “It wasn’t motivated by anything, except he had an intense love affair with words. He told stories.”

Crewe, reputedly, was not happy about being stereotyped in Jersey Boys by the authors of the musical's book, Marshall Brickman and Rick Elice, or having director Clint Eastwood extend the caricature in the movie version, which probably needed something festive since Eastwood's cameras sucked most of the energy out of a very lively theatrical play. The last time Clint had anything to do with a musical was in 1969 when, as an actor, he made Paint Your Wagon.
His big number was I Talk to the Trees. Roger Ebert called it whining, not singing, but we like Eastwood's not-terrible-at-all rendition. Octogenarian Eastwood no longer talks to trees of course, just an empty chair at the occasional GOP Convention.
As for queening up Crewe, we're not sympathetic to false characterizations by cynical writers who sell the prejudices of a patronizing audience back to them for fun and profit.
Neither do we have a surplus of empathy for Crewe, who died, dementia-riddled, in 2014.
He was, evidently, a political reactionary. His lyrics to Gaudio's Beggar's Parade, a crude class libel of 60s protesters, are truly revolting, even after all these years:


...Who needs the truth? Feed 'em lies.
They're all hungry for alibis.
Oh They're all the same,
Bowery bum, banker's son

...Your skin is thin, mine is too
What's so special about you?
Make excuses 'cause you just can't make the grade
Look in the mirror, yeah, it's true
Pitiful soul that's you
Oh, they're all the same

...Hungry for bread, plant a seed
Satisfy your evil greed
No, you'd rather collect that unemployment check
Why should you work, like the rest,
When it's easier to protest?
Oh, you're all the same,


Beggars Parade never became a hit and isn't performed by Valli, so our reverse-karaoke experience was not ruined and we didn't have to throw fruit at the stage to register our political disapproval. Instead, we had a good time and TOOK PICTURES! 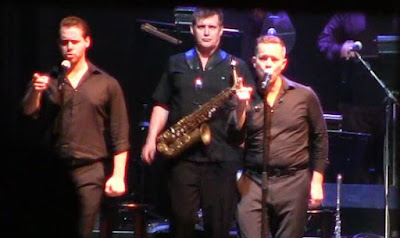 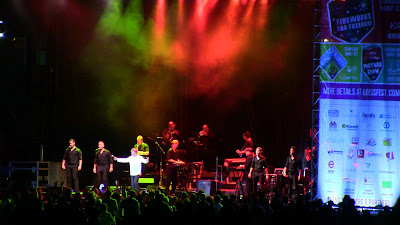