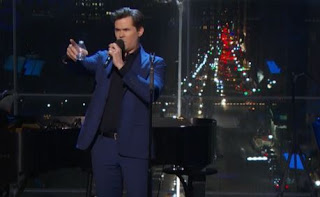 Call it the Patti Lupone Cellphone Annoyance Syndrome. In his Live From Lincoln Center concert, televised last Friday but recorded in December, Rannells waited for a break and then firmly encouraged a shutter-obsessed woman to cease and desist, here, at the 17:00 mark.


I have to say — someone's taking photos over there.
What are you making? A [god]damn flipbook?
It's like you keep takin' em and takin' em.
WE'RE MAKING IT FOR TV HON!
You can just watch it at home!
You don't need to take photos, girl.
It's ok. It's gonna be on the TEEVEE.
So let's knock it off, shall we?

Rannells's show was quite wonderful, starting with Lonely Boy and including Sondheim's No More, a song Judy Garland sang in Meet Me in St. Louis, The Boy Next Door, and even Born to Run, which substituted an accordion(!) bridge for Clarence Clemons's sax solo in the Springsteen version.
Born to Run is Rannells's go-to audition song; it got him the lead in Book of Mormon and a role in Hairspray, but not one in South Pacific. To anyone who might think a Boss anthem to be a strange choice for a Broadway audition song, Rannells notes that since Springsteen has a show on Broadway, Born to Run is now, technically, a show tune.
Not to be missed was an intentionally-over-the-top It Must Be Him, a song Rannells's mother liked (Vikki Carr Live at the Greek Theatre) and which little Andrew was shocked to discover was not also a favorite of other little boys in his neighborhood. (Here at 41:10 but it's pirated and probably won't last long on YouTube.)
Also performed was arranger/accompanist Todd Almond's beautiful Moonlight over Nebraska.Though Almond is busy, Rannells had the best possible "in" in snagging him: his agent is Todd's husband. From Lincoln Center's podcast:

Kristie Geslain: So, let's talk about your relationship with Todd.
Andrew Rannells: Yes.
KG: Because you two have been so close throughout this whole process. How do you know each other? How did you select him for this? What was your working relationship like?
AR: I was just a fan of his. I was doing Jersey Boys with this great guy named Matt Bogart, and Matt said, he was like, "Oh my friend has a band, The Todd Almond Band, and he wrote this song called 'Moon Over Nebraska.'" And he sent it to me because I'm from Nebraska, and I completely fell in love with it, and then I got Todd's album, and then I got his second album, his solo album that he did.
And he's just so talented. And then my friend Laura Benanti did a show at 54 Below with Todd, and it turned out real well. And Todd's just one of those people that I've always admired but never worked with. So when this opportunity came up, it just so happens, his husband is my agent, in a show business stroke of luck. So I asked my agent, I was like, "Do you think your husband would want to do this with me?" and he's like, "Well, ask him."
So I emailed Todd and he very sweetly said yes right away.
Posted by Enzo No comments: