Nero's sunken city:
What happened in Baiae, stayed in Baiae

Surrounded by 24 volcanoes, the Roman resort was a never-ending party of debauchery. Varo, Caesar, Brutus, Cicero and Mark Anthony all had villas in Baiae. One featured a "home theater" that seated 1,400. Nero had two villas (he may have killed his aunt to get one), a barge rowed by male prostitutes, and the best banquets in town.
From the promos for Nero's Sunken City, an episode of Secrets of the Dead:


The mere mention of Baiae brought to mind scandal and could ruin your reputation. In one description we have by the writer Seneca, he's walking by the port of Baiae and he sees people staggering around, they're so drunk, there are parties going on at boats on the bay and the air is full of loud music. Varo, for example, says Baiae is the place where old men come to become young boys again and young boys come to become girls.

Today, First National Bank of Omaha announced (via Twitter) that it will sever its relationship with the NRA, via its FirstBank subsidiary, which issues the gun organization's credit cards.
Sometimes privately-held corporations have a freer hand in acting decisively than do publicly-held firms. First National Omaha is the USA's biggest privately-held bank (assets: $19,000,000,000), and is is run by a 6th generation Lauritzen, Clark, who is in his early 40s.
The bank has faced vociferous social media criticism in the last several days. Yesterday its NRA Visa sign-up website was taken offline. First National Omaha stonewalling inquiries about relationship with NRA

Why do you let your congressman allow the NRA to hold the entire federal budget hostage in order to gag gun death research, year after year?

In 1993, a CDC study reported that residents in homes with a gun faced a 2.7-fold greater risk of homicide and a 4.8-fold greater risk of suicide.
The study, published in the New England Journal of Medicine noted that people living in those homes did not gain the protection they sought.
The National Rifle Association found the study's conclusions inconvenient, so it moved to suppress their dissemination and got its errand boys and girls in Congress to cut CDC's funding by the amount the study had cost — to intimidate the CDC and researchers.
But the NRA didn't stop there.
It also had its congressional representatives add language to the Omnibus spending bill for 1997, directing that “none of the funds … at the [CDC] may be used to advocate or promote gun control.
This was called the Dickey amendment after Jay Dickey, an Arkansas GOP congressman who introduced it. It has been included in every omnibus appropriations bill since 1997.
In 2011, Republicans added a Dickey clause to appropriations to the National Institutes of Health funding for 2012.
Years later, Dickey (now deceased) had second thoughts. In a joint op-ed in the Washington Post with Mark Rosenberg, who worked on the CDC study which angered the NRA, the two wrote,  “Since the legislation passed in 1996, the United States has spent about $240 million a year on traffic safety research, but there has been almost no publicly funded research on firearm injuries. As a consequence, U.S. scientists cannot answer the most basic question: What works to prevent firearm injuries?”


the Catholic Family & Human Rights Institute, [which] is a member of the World Congress of Families, the coalition working with NOM and others to export anti-LGBT hatred to foreign counties. Back in April, the State Department appointed Ruse to its delegation to the United Nations Commission on the Status of Women.

Lovely Austin's equally lovely wife, Cathy, types internet agitprop for the Family Research Council, where she is obsessed with the Girl Scouts, and not in a good way. She says they love Planned Parenthood, but in the last several years her machinations have made them pay more attention to her!

The real reason Adam Rippon backed out of his NBC deal 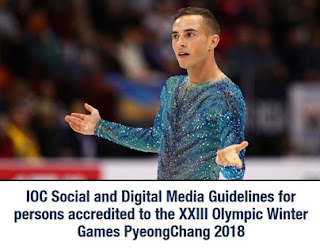 
Media  capacity: Only  persons  accredited  as  media  may  act  as  journalists,  reporters  or  in  any  other related media capacity while they are at the Games.
Accredited persons who are not accredited media can give interviews to the media but  are not allowed to report on the Games in any media capacity, including by acting on behalf of any media organisation.

There are more rules, including specific restrictions on social media postings by athletes. Go here. Or here.
Posted by Enzo No comments:

Is Trump's neglect of HIV/AIDs an imitation of Russia's?

Late last year Dan Harris, for ABC's Nightline, went to Russia to report, over two nights, the state of that country under Putin. On night two, Harris reported the shocking neglect of Russian authorities in the face of that country's exploding AIDS epidemic and official harassment of Russians trying to stem that tide. From the report, which starts at 2:17 in the video here:

Siberia, home to some of this country's poorest people: 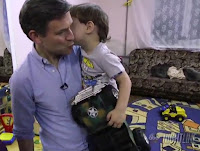 Here... we're about to see one of the darkest manifestations of the Putin presidency, the grim reality of perhaps the worst AIDS crisis in the developed world.
...The AIDS epidemic [fueled largely by heroin addiction] is growing at a frightening speed in Russia, left unchecked for too long, critics say, because Putin, who has wrapped himself in the aura of the Orthodox Church, has resisted addressing these issues. ...Putin's government has damaged efforts to address this crisis. While they do promote monogomy as a fix, they've rejected proven approaches  such as needle exchanges and free condoms, as "Western practices.
...In Russia AIDS volunteers face government harrassment and have been classified by Putin's government as foreign agents — in other words, spies.


Though gay Olympic skater Adam Rippon's mom appears to be trying to finesse the situation, it has become apparent that her son refused to talk to Vice President Pence, who was reportedly angered by remarks made to USA Today Reporter Christine Brennan in January:


The spat between the vice president and the figure skater began when I asked Rippon last month about Pence’s selection for the ceremonial role of leading the U.S. delegation to the Olympic opening ceremony.
“You mean Mike Pence, the same Mike Pence that funded gay conversion therapy? I’m not buying it,” Rippon said.
...He said he would prefer not to meet Pence during the traditional meet-and-greet between the official delegation and U.S. athletes in the hours leading to the opening ceremony.
..."Mike Pence doesn’t stand for anything that I really believe in."

Pence's people denied that he tried to set up a conversation with the U.S. Olympic Committee and accused Christine Brennan of writing fake news, also denying what is presumed to be his approval of funding of so-called gay to straight conversion "therapy," now outlawed for minors in several jurisdictions. Typically, the slippery Pence's vague denial omitted exactly what he was denying.
Here's how Brennan described Pence's and Rippon's actions to the PBS News Hour.


John Yang:
You have been reporting on a controversy involving another of the U.S. men’s figure skaters, Adam Rippon, and Vice President Mike Pence. Tell us about that.
Christine Brennan:
Back in mid-January, I actually interviewed Adam Rippon, who is one of the first openly guy athletes to compete in the Winter Olympic Games for the United States.
And I talked to him about many things, including Mike Pence being the delegation leader for the U.S. at the opening ceremonies. And Adam Rippon said that — he goes, Mike Pence, the same Mike Pence who funded gay conversion therapy? He said, I’m not buying it, and was very critical of Pence and President Trump.
And he has already said, as Lindsey Vonn has said as well, the skier, that they will not go to the White House after the Olympics to celebrate to the U.S. Olympic team. Pence’s office actually denied that Pence ever did want to fund gay conversion therapy, although there is interesting wording on his Web site from the year 2000 during a congressional campaign.
Anyway, we put that in there. Within an hour, heard from the vice president’s office that he wanted to rebut and reply to Adam Rippon.
Anyway, I have continued to report this story in the last couple of weeks. And my reporting from various sources includes the fact that Pence went so far as to want to have a conversation with Adam Rippon and work through U.S. Olympic Committee channels to try to have that happen.
And Adam Rippon declined the request from the vice president.

Few LGBTs believe Pence was not in favor of funding conversion "therapy." Here's part of what David Badash, of the New Civil Rights Movement wrote for Raw Story:


Conversion therapy, also known as reparative therapy, is a dangerous practice that supposedly turns gay people straight. It does not. In fact, every major medical organization has warned of the possible harms it can bring, which noting it is ineffective. It has also been linked to suicide. Judges have ruled it is “fraud.”
Yet when running for re-election as a U.S. Congressman Mike Pence’s campaign website noted he supported funding the practice, which Pence now denies.
“The widespread belief that Pence supports gay conversion therapy,” USA Today noted, “comes from a statement he made in 2000 on his congressional campaign website: ‘Resources should be directed toward those institutions which provide assistance to those seeking to change their sexual behavior.’ While he didn’t explicitly mention gay conversion therapy, leaders in the LGBT community have said they believe that’s what Pence meant in light of his long-standing opposition to gay rights.”

Last Saturday on SNL, Pete Davidson griped to Colin Jost about the trouble he had in San Francisco getting passersby to take off their pants for a Dockers promotion.
Geez, we dunno, maybe it was his approach...


Does anyone here wanna take their pants off?
JESUS! NOBODY LIKES ME!
Hey! Sir! You look like you're packing. Would you like to take your pants off?
...[to an Asian guy] First we have to compare wangs. Is that Ok?