HOW TO GET INTO THE BEDROOM
OF JAMES VAN DER BEEK

No boys, don't bother stripping like Scott Caan (son of James) did in Varsity Blues. (Caan never got past pretending to fellate Mr. Van Der Beek in the locker room, anyway.)

Van Der Beek, 32, is looking to buy on the Westside.

Strongly identified with the title role of Dawson Leery in "Dawson's Creek" (1998-2003) he stars this year in the thriller "Formosa Betrayed."

Contact Adrienne J. Kessler of Keller Williams Realty, Sunset office, if you're interested. Be sure to ask if the rope suspension gear above Mr. Van Der Beek's bed stays or if he's taking it with him.
Posted by Enzo No comments: 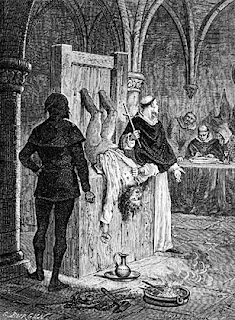 According to the Pew Forum on Religion & Public Life, white evangelical Protestants are the religious group most likely to say torture is often or sometimes justified -- more than six in 10 supported it. People unaffiliated with any religious organization are least likely to back it. Only four in 10 of them did.
—4/30/09 Via CNN
Posted by Enzo No comments: 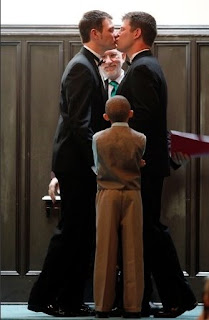 I DO ADO
Seventeen same-sex couples from the St. Louis area got on a bus and were married May 1 in Iowa City by the Unitarian Universalist Society. Photos by Brian Ray are from a slide show accompanying the article here: 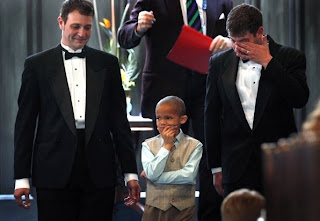 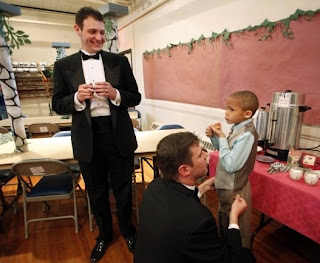 I’ve had some friends that are actually homosexual. And, I mean, they know where I stand, and they know that I wouldn’t have them anywhere near my children.
—Joe The [unlicensed] Plumber Wurzelbacher,
Republican Icon, in Christianity Today

YOU MIGHT THINK THIS NEW DEVELOPMENT IS THE WORST THING TO HAPPEN TO THE NATIONAL ORGANIZATION FOR MARRIAGE THIS WEEK...

Alicia Jacobs, the Entertainment Reporter at KVBC in Las Vegas, who has seen six of the topless photos of Carrie Prejean, says some are even more revealing than this one posted on TheDirty. She also thinks the photos may have been taken after Prejean’s pageant-financed breast implant surgery.

[Miss California USA pageant officials now say they "arranged" but did not pay for Prejean's procedure.]


...BUT YOU'D BE WRONG. THIS IS:
LOS ANGELES, CA – Californians Against Hate had representatives go by the Princeton, New Jersey offices of the National Organization for Marriage (NOM) twice to get copies of their IRS 990 reports, to no avail. NOM is required by federal law to have these available for public view. Then our representative, Ben Katzenberg, sent two certified letters to the NOM office on March 18, 2009 requesting its two 990 forms. Federal law requires NOM to furnish copies of these IRS filings within 30 days after the requested has been received. And 40 days later, still no 990s.

We have filed a formal complaint with the IRS for their failure to comply with the federal public disclosure laws. The IRS imposes fines of $20 per day up to $10,000 per committee until the financial disclosures are made public. 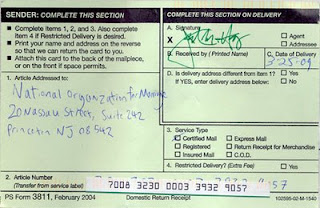 Here is a copy of the U S Post Office certified mail receipt signed by NOM:

Six weeks ago Californians Against Hate filed a formal complaint with the California Fair Political Practices Commission (FPPC) charging that the Church of Jesus Christ of Latter-day Saints (Mormon Church) established NOM as a front group to qualify California ’s Prop 8 for the ballot, and to fight marriage equality around the country. The FPPC has an ongoing investigation (Case #080735) against the Mormon Church. They are looking into this charge and the Mormon Church’s lack of reporting its massive non-monetary contributions on behalf of Yes on Prop 8.

The Mormon Church has a long history of using front groups to carry on its fights opposing same-sex marriage beginning in Hawaii in 1998. The Mormon Church established “ Hawaii ’s Future Today” to support that state’s constitutional amendment opposing same-sex marriage. Documents obtained by Californians Against Hate are posted on our new web site: Mormongate.com which detail exactly how the Mormon Church has set up these front groups in the past. The 18 month old NOM shares a strikingly similar heritage.

Maggie Gallagher is president of NOM. She was the subject of a George W. Bush administration scandal. Maggie was paid over $40,000 by the federal government to promote Bush’s educational agenda and never disclosed the fee for several years. She was a nationally syndicated columnist at the time, and used her columns as the vehicle to promote the Bush Administration policy. She continually denied that she was under contact to the Department of Health and Human Services for many years.

“We want transparency here,” stated Fred Karger, founder of Californians Against Hate. “We hope that the National Organization for Marriage will obey the law and release both of its Federal 990 reports immediately. What are they hiding?"

"They now claim to be spending $1.5 million on their outrageous TV commercials. Where is that money coming from? How much are they personally paying themselves? How much 501(c)4 money did they raise to qualify and pass Prop 8? These and many more questions need to be answered, NOW."

"The Mormon Church has led the fight against same-sex marriage in the United States for the past 20 years, and it has always done so very secretly. They have the right to participate in the political process, but they must abide by all federal and state laws. The public is entitled to see the IRS filings, and we hope that Maggie Gallagher and the other NOM board members will comply with our request," concluded Karger.
Posted by Enzo No comments:

The other Keith, Keith Lewis, a state director for the Miss California USA state organization was interviewed recently about how that organization plans to handle their loose cannon. You wouldn't want his job.
Posted by Enzo No comments:

NEBRASKA SENATOR BEN NELSON SELLS OUT HIS CONSTITUENTS AGAIN — THIS TIME TO THE AMERICAN BANKERS ASSOCIATION
Visit msnbc.com for Breaking News, World News, and News about the Economy
Yesterday, Senator Dick Durbin introduced an amendment to save 1,700,000 homeowners from foreclosure by rolling back bankruptcy laws 30 years to allow judges once again to rewrite mortgages, allowing homeowners to stay in their homes, their neighbors to keep their property values, and banks to still get their money.

One was Ben Nelson, who received 1.4 million in campaign contributions from banks and real estate interests. Nebraskans will lose an estimated 3700 homes due to foreclosure.

Tell Nelson what you think of what he did here.