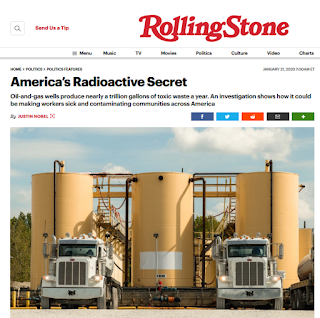 
Many industry representatives like to say the radioactivity in brine is so insignificant as to be on par with what would be found in a banana or a granite countertop, so when Peter demanded his supervisor tell him what he was being exposed to, his concerns were brushed off; the liquid in his truck was no more radioactive than “any room of your home,” he was told. But Peter wasn’t so sure.
“A lot of guys are coming up with cancer, or sores and skin lesions that take months to heal,” he says. Peter experiences regular headaches and nausea, numbness in his fingertips and face, and “joint pain like fire.”
...Radium, typically the most abundant radionuclide in brine, is often measured in picocuries per liter of substance and is so dangerous it’s subject to tight restrictions even at hazardous-waste sites. The most common isotopes are radium-226 and radium-228, and the Nuclear Regulatory Commission requires industrial discharges to remain below 60 for each. Four of Peter’s samples registered combined radium levels above 3,500, and one was more than 8,500.
...Tanks, filters, pumps, pipes, hoses, and trucks that brine touches can all become contaminated, with the radium building up into hardened “scale,” concentrating to as high as 400,000 picocuries per gram. With fracking — which involves sending pressurized fluid deep underground to break up layers of shale — there is dirt and shattered rock, called drill cuttings, that can also be radioactive. But brine can be radioactive whether it comes from a fracked or conventional well; the levels vary depending on the geological formation, not drilling method.

Oil shale / fracking brine is saline enough that the salt content alone can ruin surrounding farmland near spills. It is usually dumped into "injection wells," specifically Class II injection wells — the only such class not regulated by the Nebraska Department of Environmental Control, to wit:


Class II wells are associated with oil and gas production, and are regulated by the Nebraska Oil and Gas Conservation Commission. NDEQ has authority over and manages Class I, III and V wells.

And what does the Nebraska Oil and Gas Conservation Commission think about radioactivity in the Class II injection wells containing waste brine from Gas/Oil operations? Below is what it told the Unicameral, reiterated here, on page 11.

Hardly what the EPA said about radioactive brine in class II wells last year, is it?


Extraction of oil and gas usually produces large amounts of brine. Often saltier than seawater, this brine can contain toxic metals and radioactive substances. Brines can damage the environment and public health if discharged to water or land... 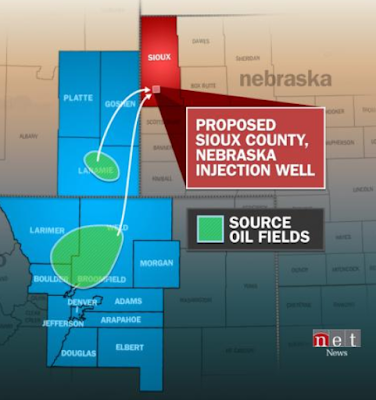 In that year, 2015 there were already 115 such injection wells in Nebraska when Terex proposed a facility accepting "upwards" of 80 trucks/day of waste brine from Wyoming.
You really should read NetNebraska's excellent story about panhandle opposition to the project, linked in the paragraph before this one.
Posted by Enzo 1 comment: