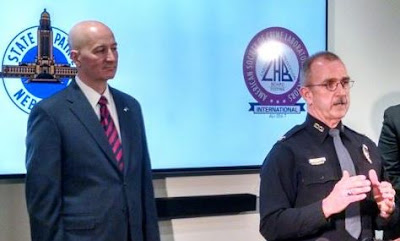 In 2015, Gov. Pete Ricketts had this to say about Brad Rice, his pick to head Nebraska's State Patrol:


“Bradley’s prior service in a variety of ranks within the Nebraska State Patrol’s chain of command will guide his leadership as Superintendent,” said Governor Ricketts. “I know his integrity will direct his decisions as he works with patrol members across the state to protect public safety.”

During Rice's confirmation hearing, accusations of sexism and proselytizing were raised.

As for the prayers, Hanlin said because the agency lacked space for meetings with all troop area staff members, the meetings often were held in a school gymnasium on the campus of a Norfolk church. Rice frequently began such meetings with a prayer, Hanlin added.
Hanlin said he was aware a complaint had been filed by another trooper over the prayers. After the complaint, the troop area meetings were no longer held at the church property.
Former Patrol Col. Tom Nesbitt, commander of the patrol from 1999 to 2005, said he recalled that a complaint had been filed against Rice. Based on his recollection, however, the complaint involved Rice putting religious information in the office mailboxes of patrol employees.
Nesbitt said he assigned a major to investigate the issue, although he could not recall the outcome.

The initial findings of an internal review of State Patrol policies, procedures and leadership conduct suggested "interference in internal investigations at the highest level," the governor said.
...Ricketts said he met with Rice early Friday morning and "relieved him of his duties."
Six State Patrol officers were placed on administrative leave pending an ongoing investigation by State Human Resources Director Jason Jackson.
...Initial findings of the continuing investigation have been turned over to the FBI and the U.S. Attorney's office for further investigation, the governor said.

The governor's investigation was probably prompted by the latest Nebraska State Patrol controversy, following the death of a convicted felon who tried to outrun a state trooper near Gordon.
Shortly after the crash, trooper Tim Flick said thrice that he performed a TVI ("tactical vehicle intervention"), also known as bumping or ramming a suspect's vehicle.
Then Flick's commander got involved:


In an email and a memo, the trooper’s commander, Capt. Jamey Balthazor, who heads the Panhandle troop of the patrol, said Flick had told him in a roadside meeting a couple of hours after the crash that LaDeaux had caused it by steering into his cruiser.
When Flick was asked by grand jurors why his story had changed, the trooper said he didn’t realize until later that he had not used a TVI.