Gay Nebraska TV weatherman gets fed up with a Facebook troll 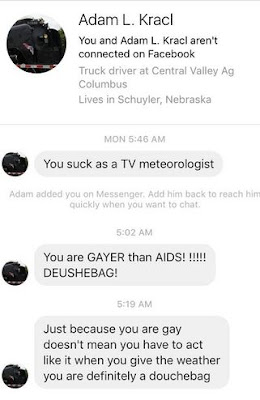 KETV, the Omaha ABC affiliate with the highest rated newscasts, has its heavy weather lifting done by Chief Meteorologist Bill Randby, the subject of a minor personality cult led by @MeanStreetsOMA, which mostly tweets transcripts of police scanner calls, but sends out special tweets every time Bill Ramby rolls up his sleeves on air (meaning the weather is getting complicated.)
Mean Streets has 113,000+ followers(!) (There's a big local audience for online gawking, folks.)
But it wasn't Ramby who was getting the attention in the aftermath of yesterday's hailstorm, it was Meteorologist Matt Serwe, who has had it with a particular Facebook detractor and who tweeted out a screencap of said critic's FB mini-rants (at right.) That tweet got a lot of sympathetic replies.
It turns out that the aggressively dissatisfied Mr. Kraci, of Schuyler, is not currently employed at Central Valley Ag. 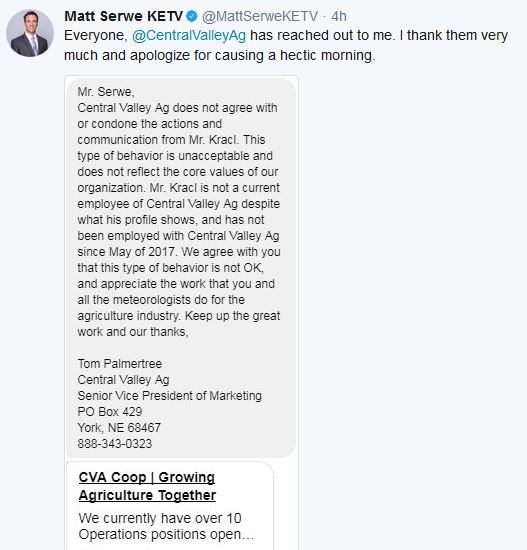 Schuyler, the seat of Colfax County, is about 67 miles from Omaha, has about 6,211 people, and is named after an amiable, but hapless former Vice President, Schuyler Colfax. As it happens, Serwe's boyfriend has family there, and has assured his other half that the natives are generally friendly.