Continuing his I'm-not-planning-to-run-for-office-I-just-like-to-hang-out-in-truckstops-in-rural-America tour, Mark Zuckerberg wished the world a happy Pride from Nebraska. The Facebook founder and CEO turned up in Stinson park in Aksarben Village. (Aksarben is Nebraska spelled backwards, and now you now why this quasi-gay Omaha blog is called AKSARBENT.)
Facebook is building a huge data center, its ninth, in Papillion, an Omaha suburb. Yahoo is expanding its data center in LaVista, another Omaha suburb, and Google's $2.5 billion data center in neighboring Council Bluffs, Iowa is its largest in the world.
We hope they're all tornado-proof, because last week a tornado hopscotched across Offutt AFB in Bellevue, another Omaha suburb, taking out two of the four "doomsday" converted 747 command planes that supposedly would direct America's response to a nuclear attack. But we digress...
On Saturday, Zuckerberg posted this on his Facebook page:


Happy Pride from Omaha, Nebraska to everyone celebrating this weekend across the world!
I'm at the Heartland Pride Festival. Until recently, the Nebraska constitution banned gay marriage. Omaha is more welcoming, but we still have a long way to go. 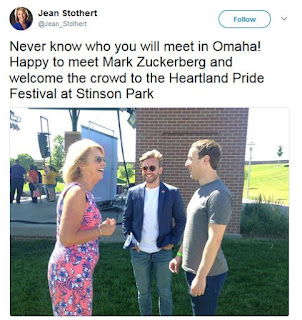 Zuckerberg spent 10 minutes amiably chatting with Mayor Jean Stothert, who twice opposed Omaha's ordinance banning workplace discrimination against LGBTs while she was on the city council (see video below).
Stothert also excluded legally married spouses of gay city employees from city benefits long after virtually every other jurisdiction in the metro area had stopped doing so, and in her recent reelection campaign she blatantly lied about housing discrimination against LGBTs, telling a television audience that adding housing to the city's LGBT antibias ordinance provisions was unnecessary because LGBTs are covered under federal law, when they aren't.