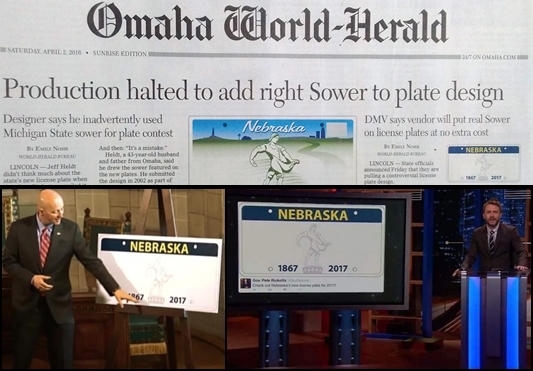 The Omaha World-Herald reports that the "vendor" producing the ugly Ricketts administration sesquicentennial Nebraska license plates will halt production until a new image of the Sower sculpture can be produced. The current image is a composite of the sculpture atop the state capitol in Lincoln (left, at the bottom of this post) and a bas relief sower image at Michigan State (right, at the bottom of this post. Both were created by Lee Lawrie, who also made the bronze Atlas installed in 1937 in Rockefeller Center in New York City.
The real reason for the reversal, we'd bet, is that Nebraskans largely hate it and that it has been ridiculed as outrageously phallic on Comedy Central, although to be fair, having a sculpture of a sower flinging seed atop a dome atop a 400-foot shaft is pretty phallic to begin with and was probably the reason that Ernest Hemingway once referred to the Nebraska State Capitol as the "penis of the plains" in a visit to UNL.
@Midnight host Chris Hardwick snarked: “They chose Myriad Pro Black for the font!? Real original.” He also didn't like that it drew attention from "the muscular Quaker jerking off on the cupcake."
(Obviously, Hardwick has never seen the inside of the state's Art Deco capitol.)
In respect of fonts, few people know that Bertram Goodhue, who designed the capitol building, also designed an enduringly popular typeface, Cheltenham, which for years served as the headline font of the Omaha World-Herald.
This marks the latest embarrassment for Nebraska's rookie GOP Governor Pete Rickets, scion of the TD Ameritrade fortune. It follows publication of him posing for a smiling selfie with the right-wing radical who called SCOTUS Justice David Souter a goat fucking child molester, of him flying to Chicago to attend his sister's gay wedding after opposing same-sex marriage in Nebraska, of his administration trying to list gay spouses as "friend" on birth certificates, of him blowing in excess of $50,000 of tax dollars attempting to import illegal drugs into the state,  of him pronouncing it "fitting and proper" for "all" Nebraskans, (presumably including Atheists and Agnostics) to acknowledge their gratitude for god's blessings and of him and his staff employing private emails to do public work. 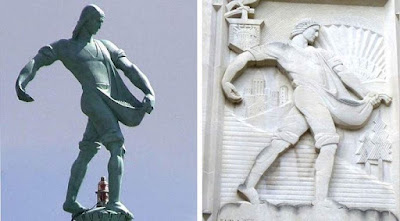