Howw much of your taxes do you think AG Jon Bruning and AG Don Peterson have squandered tilting at this windmill since 2014? From the Denver Post:


Because the matter involves a dispute between states, it was filed directly to the Supreme Court. The first step in the lawsuit was for the justices to decide whether they even wanted to consider it. When the Supreme Court does accept such cases, the subsequent litigation can go on for years or even decades.
Attorneys for both the state of Colorado and the Obama administration had urged the court not to take up the lawsuit...
"Entertaining the type of dispute at issue here — essentially that one State's laws make it more likely that third parties will violate federal and state law in another State — would represent a substantial and unwarranted expansion of this Court's original jurisdiction," U.S. Solicitor General Donald Verrilli Jr. wrote in his brief to the court.

Nebraska's position (From High Times) was that Colorado's Amendment 64, ending Colorado's pot prohibition, flagrantly violated the Controlled Substances Act and the Supremacy Clause of the U.S. Constitution. Unfortunately for NE AGs Jon Bruning (who started the suit in 2014) and Don Peterson (who continued it), and Nebraska taxpayers, who have footed the bill, not even the federal government bought the argument:

In December 2015, U.S Solicitor General Donald Verrilli Jr. advised the Supreme Court not to entertain the lawsuit because it was not “an appropriate case for the exercise of this Court’s original jurisdiction.” Verrilli recommended the abandonment of the case since the issue at hand was the criminal actions conducted by individuals and not by the state of Colorado. It is not known how much this guidance had to do with today’s outcome.
“At the end of the day,” Angell [Tom Angell, of the Marijuana Majority] explained,  “if officials in Nebraska and Oklahoma are upset about how much time and resources their police are spending on marijuana cases, as they said in their briefs, they should join Colorado in replacing prohibition with legalization. That will allow their criminal justice systems to focus on real crime, and it will generate revenue that can be used to pay for healthcare, education and public safety programs." 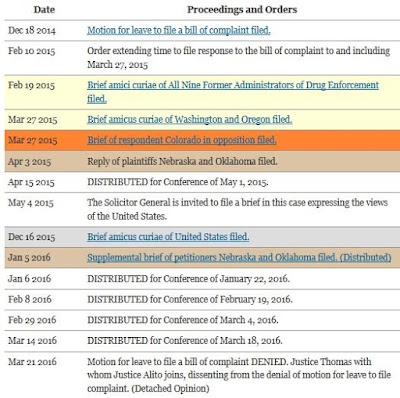