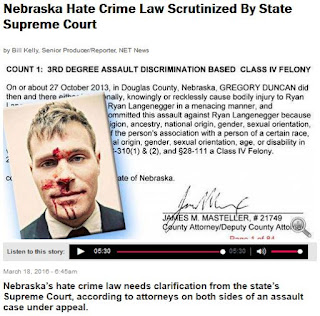 Both sides involved in the appeal by Gregory Duncan of his hate crime conviction in Omaha for sucker punching the straight Marine friend of two gays (Ryan Langenegger, right) have asked for clarification of the state's hate crime law. Excellent coverage by Bill Kelly of NET, including an audio version of the story here.


At the hearing, questions were raised about what factors contribute to defining an assault based on discrimination and the potential need for a definition of “sexual orientation,” which recognizes transgender and increased understanding of more fluid expressions of sexuality.
“Do we have to adopt a new definition or standard?” asked Chief Justice Michael Heavican at one point. Most of the seven judges in session asked what the attorneys arguing opposite sides of the case would add to an opinion that would give guidance to judges in future cases. At other times they wondered aloud if it would require a change in law from the state legislature.

Video of arguments before the Nebraska Supreme Court is below. The Duncan appeal starts at about the 24:10 mark.