Here is a statement from Trevor Jones, Secretary, S.D. Dept. Of Public Safety:


I decided to pull the ad. This is an important safety message and I don't want this innuendo to distract from our goal to save lives on the road.

Officials admitted to the Argus Leader that the double entendre was intentional."


...[Rep. Mike] Verchio, a Republican from Hill City who chairs the House Transportation Committee, said he heard from several citizens who were upset about the ad after reading the Argus Leader Media story about it.
...The part of the campaign that's garnered the most attention so far is the #DontJerkAndDrive hashtag, pushed out through social media. That wording might not sit well with everyone, but the message isn't meant for everyone, either.
That particular portion of the $100,000 campaign — a figure Axdhal called "a drop in the bucket" — targets young men, as they're the drivers most likely to overcorrect and cause fatal traffic accidents. 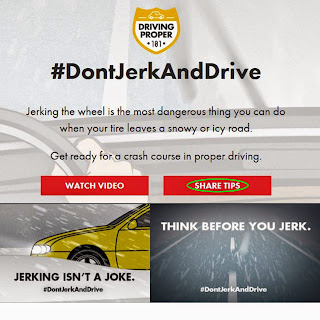 ...The ad campaign, despite the second thoughts, was shaping up to be incredibly successful for South Dakota.
More than 16,000 people saw the campaign on Twitter in its first week. Page views at the DPS's Facebook page have jumped to almost 30,000 since the campaign launched, outperforming previous public safety campaigns 25 to 1.
...The ad industry average for interaction in sponsored tweets is between 1 percent and 3 percent. The "Jerk" campaign's sponsored tweets have a 6.9 percent interaction rate.
...Bryan Ruby, owner of the web consulting business CMS Report, was impressed with the campaign from a marketing standpoint. Online, he called it "brilliant."