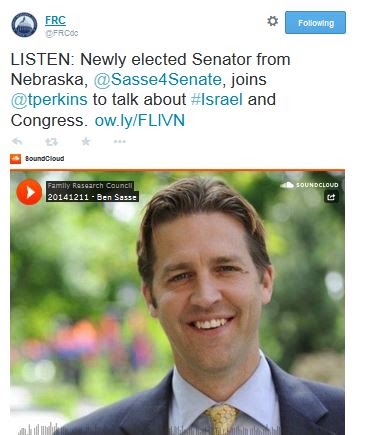 Here's what Senator-elect Sasse told KMTV when it asked him if he had any opinions about the just-released report by the Senate Intelligence Committee report on CIA torture:


Right now, Senator-elect Sasse is focused on building the best team to serve Nebraska when he hits the ground running on January 6th. As such, he is politely declining requests to discuss matters before the lame-duck Congress.

But Sasse found time in his busy schedule to talk to the so-called Family Research Council, an SPLA-designated hate/extremist group headed by Tony Perkins, who was once fined for lying about buying a KKK mailing list in order to elect a Louisiana politician.


In 1996, while managing the U.S. Senate campaign of Woody Jenkins against Mary Landrieu, Perkins paid $82,500 to use the mailing list of former Klan chieftain David Duke. The campaign was fined $3,000 (reduced from $82,500) after Perkins and Jenkins filed false disclosure forms in a bid to hide their link to Duke. Five years later, on May 17, 2001, Perkins gave a speech to the Louisiana chapter of the Council of Conservative Citizens (CCC), a white supremacist group that has described black people as a “retrograde species of humanity.” Perkins who addressed the group while standing in front of a Confederate flag, claimed not to know the group’s ideology at the time, but it had been widely publicized in Louisiana and the nation, because in 1999 — two years before Perkins’ speech to the CCC — Senate Majority Leader Trent Lott had been embroiled in a national scandal over his ties to the group. GOP chairman Jim Nicholson then urged Republicans to avoid the CCC because of its “racist views.”