Meet Rep. Kevin Yoder (R-KS) who introduced that Citigroup legislation to bail out bank losses on risky investments with your taxes


Second-term Rep. Kevin Yoder (R-$) really represents CitiGroup in the U.S. House of Representatives but is supposed to represent the third congressional district of Kansas, including Wyandotte and Johnson counties, which include Kansas City and the surrounding suburbs of Overland Park, Lenexa, Shawnee and Olathe.
He is the man who slipped lobbyist-written legislation into a must-pass spending bill too late for debate. The bill is called the Swaps Regulatory Improvement Act and will gut a section of the 2010 Dodd-Frank financial reform act called the "push-out rule" that forbids banks from trading certain risky derivatives (which are complicated financial instruments with vales derived from underlying variables, such as crop prices or interest rates) with money insured by the Federal Deposit Insurance Corporation (FDIC). If this bill passes the Senate, taxpayers will be on the hook for more of Wall St.'s reckless gambling losses. The vote is here.
Mr. Yoder's constituents and non-constituents are not happy with him and have been registering their disapproval on his Facebook page. The Huffington Post says Rep. Yoder isn't saying much these days:


Yoder has been mum about the spending package since it passed the House. His office hasn't responded to multiple requests for comment on why he slipped the Citigroup language into it. The press statements on his website say nothing about the provision or the spending bill. There are no posts about it on his Facebook page. He's said nothing in his Twitter feed. 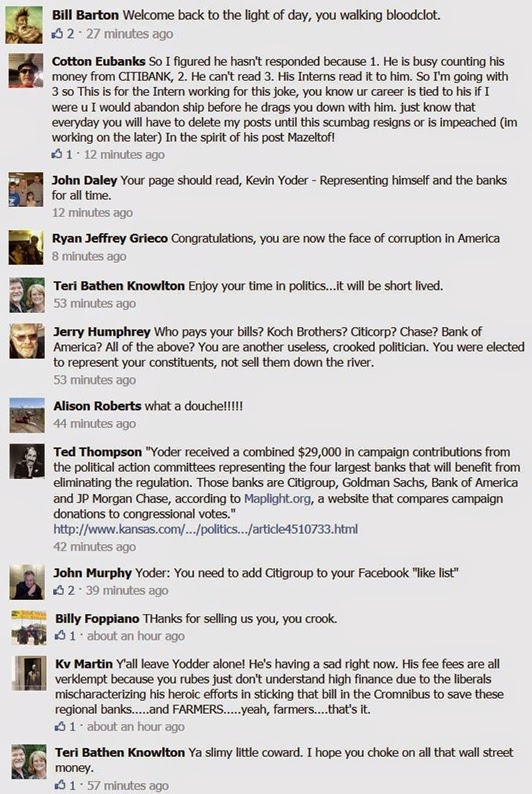