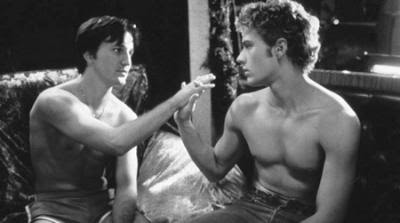 Writes Greg Hernandez in Greg In Hollywood:
Film editor David Kittredge who worked with [director Mark] Christopher on the director's cut for Berlin, wrote in a Facebook post Tuesday (16 December) that the studio-ordered 90 minute film was 'very different' from the original vision.
Kittredge said he and Christopher have worked 'tirelessly' for the past several months 'trimming things and adding over 30 minutes of newly-digitized dailies that have not seen the light of day since 1997.'
The re-cut version includes even more restored footage than what was shown at a well-received 'secret screening' of Christopher's vision at the 2008 Outfest Film Festival in Los Angeles.
'Incredibly excited to have been the editor of what amounts to a massive cinematic restoration of a really great movie that would have blown people's minds in the '90s,' Kittredge wrote.
Posted by Enzo