NE Unicameral twitter hash tag:  #NeLeg
Last week saw the hearing for LB167, Senator Megan Hunt's bill to ban commercial conversion therapy in Nebraska. It lasted longer than 3 1/2 hours and included disturbing testimony from several survivors of so-called conversion or reparative therapy, including Adam Witte (40:33 in the hearing video below), who described the practice as "damaging-to-barbaric, as well as ineffectual" and recounted his experiences, in Nebraska in 1998-9, at a "treatment facility" which waived parental authorization and subjected him, over 15 months, to shock treatments so severe that at one point he passed out and discovered, upon regaining consciousness, that part of his tongue was missing.


Above: the film "Boy Erased" loosely recreated a mock funeral staged by the Memphis, Tennessee group "Love in Action" as punishment for Aaron Aupperle, of Lincoln, who recounted his time in conversion therapy at the 48:15 mark in the hearing video below

Matt Sharp, of the virulently antiLGBT Alliance Defending Freedom swooped into Lincoln last Thursday to testify against LB167, Senator Megan Hunt's bill to ban commercial conversion therapy in Nebraska. (ADF is a very well-heeled organization. It has raked in over a million bucks in Arizona alone from specialty license plates.)
Sharp got three minutes to make his case, like everyone else, but senators then peppered him with nearly half an hour of questions ranging from  skeptical to outright mocking.
AKSARBENT published a short wishlist of questions it wished the Judiciary Committee had asked Sharp about his organization, but nobody listens to us.
Sharp's testimony, (at 2:27:25 in the video below) centered largely on a recent Florida case, argued that LB167 infringed the (commercial) free speech of counselors. It also engendered a lot of tilted-head skepticism.

Senator Ernie Chambers: First of all, Florida law is not binding on Nebraska. An injunction is not a decision by the court on the merits of a case. Have you ever heard of the term "false advertising"?...Well is that protected by the first amendment, to allow you to say anything you want to about any product that you're selling? [An obvious reference to the debunked practice of conversion "therapy" to alter sexual orientation or gender identity.] 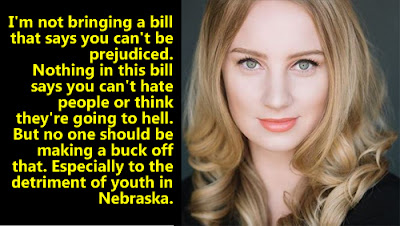 ...This is based on the exchange of money for a service. I'm sure you know enough about federal requirements when it comes to regulation of medicines, as opposed to these quack items that they sell in these stores called "supplements." They're not subject to regulation by the FDA because they don't profess to be medicine. They cannot make any medical claims. It would seem from what you're saying that that violates their right to free speech because they should be free to say anything about their product they choose and if the public accepts it they should be allowed to do it but that's not the law. So when you read this law, you see that it's talking about a deceptive practice. Is that what you read in the law that we're talking about?
Matt Sharp: I do understand that... this is putting these conversations under the Deceptive Trade Practices Act. That's correct...
Senator Patty Pansing Brooks: So you keep mentioning this Florida case, but the Supreme Court, right?, has twice decided not to rule on gay conversion therapy and one was in 2014 and ... the most recent one was less than a year ago, so you're conveniently not talking about that fact, so would you like to respond to that?
Sharp then cited a Supreme Court case ruling that California unconstitutionally burdened an unlicensed pregnancy crisis center's free speech. (You can read the court's decision — and the dissent of four justices — here: https://casetext.com/case/natl-inst-advocates-v-becerra-1)
...Senator Chambers: Counselor, I'm concerned about children. I'm concerned about people with power torturing weak people. Have you ever had electrical shock applied to your testicles?
Matt Sharp: No I have not.
Chambers: How do you think you'd like that?
Sharp: I think anyone would be very opposed to that.

Chambers: Are you aware that that is considered torture?
Sharp: I'm not familiar with the international laws but I believe that is abusive.
Chambers: I don't just mean international law — in America. If somebody was found to have put a person in a position to electrically shock his or her, well, his, testicles, that would be considered torture.
Sharp: And that's what the court in Florida said. When you're looking at that, if that's what you want to address, do a targeted law towards that. You do not do a broad proscription on all constitutionally protected speech.
Chambers: I'm not talking what you said the Florida court ruled. I'm talking about conduct that is embraced in what these people want to do to children — unless you think those testifiers were lying. Do you think they were telling the truth when they talked about what they experienced?
Sharp: I do.
Chambers: When one said that he was shocked with such a large jolt that he was unconscious and when he woke up, a large chunk of his tongue was missing. You approve of that being done to children, don't you?
Sharp: No.
Chambers: Do you have children?
Sharp: Yes I do.
Chambers: Would you agree to let some people in a church tell you they should be allowed to apply electrical shock to your child's testicles?
Sharp: I love my children and would protect them with my life.
Chambers: And if somebody did that to my child, they wouldn't be here talking now. I'd be on trial someplace and I don't think a jury would convict me. Here's what I'm getting to. All of these side issues mean nothing to me. They can be handled in court. But when I know there are children right now with parents so foolish, preachers so lacking in concern, that these children will be tortured for the sexual gratification of adults, then I'll do all I can to stop it. And see, I'm not going to be around to push and play. The schools that were in black communities used corporal punishment against our children, so I got it outlawed in all the public schools in the state of Nebraska. I got a law that made it — even before the U.S. Supreme Court said it could be done — that if somebody was under the age of 18 when they committed a murder, they could not be executed. I didn't wait for the U.S. Supreme Court. I care about young children and I know how adults abuse children. Sex trafficking goes after children because they're vulnerable and a lot of these things happen in churches... Do know what the letters — to get in your territory — do you know what the letters "FCC" stand for? 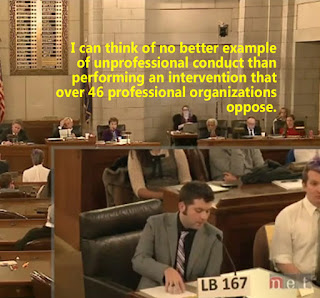 Sharp: I believe Federal Communications Commission.
Chambers: Bingo. Now what is communication? Does that involve speech?
Sharp: Yes it does.
Chambers: And the FCC regulates that, doesn't it?
Sharp: And the Supreme Court has also recently called into question some of those regulations, on the idea that commercial speech is entitled to less constitutional protection.
Chambers: Counselor, if you don't mind answering the question, you don't have to obfuscate me. I understand the law. I don't dress like a lawyer but my brain operates like one. Just so — in the interest of disclosure — I have a law degree. Now, are you aware of why these big pharmaceutical firms who advertise their medications on television tell you all the side effects, some of which are fatal? Do you think they do that voluntarily? They were told by the FCC that they cannot advertise products unless they tell all of the side effects.
The entire hearing was recorded and uploaded to YouTube (above video) by John Skinner, who also testified before the committee (1:41:10 in the video) in a sharply-worded, factual excoriation of the Nebraska Family Alliance (formerly, the Nebraska Family Council), a virulently antiLGBT organization about which which AKSARBENT has written here, here, here, here, here, and here.
Posted by Enzo