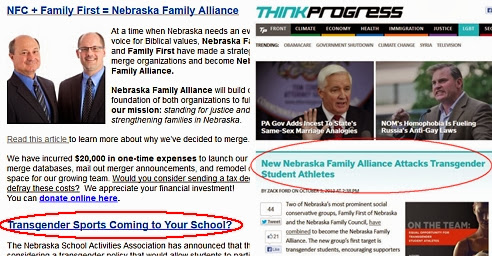 The first money-beg on the newly formed Nebraska Family Alliance's web site comes just above a ginned-up attack on transgender student athletes. Why do we say "ginned-up"? Well, their very first bullet point has no scientific validity, a point raised by Zack Ford in a piece that also demolished the other two rhetorical lynchpins of NFA's cynical, fund-raising distortion of the issue.


First, the claim of unfair advantages relies on a number of assumptions that paint an incomplete picture. A national report on transgender equality in scholastic athletics points out that this argument only applies to trans women (those born male), assumes that trans women are not “real” women, and leaves no room for trans women who have used hormone blockers to avoid the impact pubescent testosterone might have on their bodies. Further, research has found no evidence to suggest trans women actually have a competitive advantage:

It is also important to know that any athletic advantages a transgender girl or woman arguably may have as a result of her prior testosterone levels dissipate after about one year of estrogen therapy. According to medical experts on this issue, the assumption that a transgender girl or woman competing on a women’s team would have a competitive advantage outside the range of performance and competitive advantage or disadvantage that already exists among female athletes is not supported by evidence. As one survey of the existing research concludes, “the data available does not appear to suggest that transitioned athletes would compete at an advantage or disadvantage as compared with physically born men and women.”

The Nebraska Family Alliance has published contact information for citizens to relay their concerns to the Nebraska School Activities Associations. Why not use their guide to relay your concerns about unscientific objections from right-wing pressure groups being used to create policies in Nebraska's public schools rather than the best available research?