Four pieces you should read about the gun debate 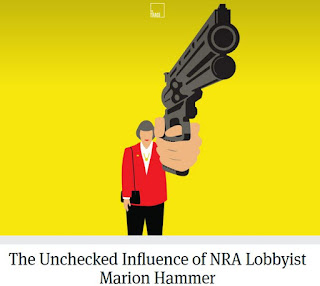 Did you know that although the NRA controls Florida's legislature more tightly than it does in any other state, the organization's PAC has not made a single direct contribution to any current member of the Florida House or Senate in 10 years, according to the New York Times?
Did you know that what most defines an assault weapon isn't how fast the semiautomatic or automatics fire, but the velocity of the bullets they fire? A Parkland radiologist explained the grisly details from an Emergency Department perspective in The Atlantic.
Did you know that Florida's NRA enforcer/lobbyist is a old, pint-sized woman who so terrifies legislators that they won't even cross her in naming a state bird? Tracer and the New Yorker investigated Marion Hammer. HuffPost had the bird anecdote.
Posted by Enzo