In the wake of Jean Stothert's poll victory, her occasionally inept digital campaign manager, Jerry Kratochvil, has favored the Omaha blogosphere with a stupendously rambling political analysis of why Mayor Gravel decisively (but not overwhelmingly) beat Heath Mello on her cratered road to reelection.

Kratochvil's piece takes a while time to slog through. We preferred Erin Grace's account of the election in last Sunday's World-Herald. It was shorter, sharper, funnier and got to the point: Dems didn't get out their vote.

(After the Obamas deservedly retired to fat book contracts and speaking fees, private planes, and vacations in Palm Springs with gay friends, many in Omaha's District Two (and elsewhere) evidently took to hiding under the covers and from Twitter, even on election day.) 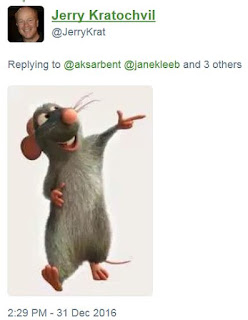 Kratochvil mentioned AKSARBENT (in order to take a swipe) but not where he should have: the part in which he implied that it was Kyle Michaelis, rather than us, who first mentioned that a twitter handle professionally picked by Jerry hisself for hisself was the hilarious moniker "JerkRat."

We're pretty sure we were the first to mention it on Twitter; Jane Kleeb, who has a sense of humor, immediately retweeted our giggly revelation, where it was seized on by other amused Dems, including Michaelis

Kratochvil quickly ditched "JerKrat," much to our disappointment, once he discovered that trying to paper over his screwup with a cute Ratatouille rodent wasn't going to fly.

In his opus, Kratochvil went on to deplore the lack of civility on Twitter, which is like breathlessly discovering that the Pacific Ocean tastes really salty. He started a screenshot file of people who wrote "Fuck the mayor" and said that file was chock-full. (What is it, a paper file?) He went on:

Of course I’ve also never seen so many new accounts created with nom de plumes either. Now you can laugh that the guy who was only known as “Street Sweeper” is complaining about this. But my blog was up for over 3 years before I got a Twitter account. For instance, I don’t mind the anonymous angry, hard-left leaning “Aksarbent” blog’s posts or tweets If you want to find out what else they have to say, there’s a trove of posts over years. (For instance, I’m sure they see themselves as middle-of-the-road.)


Point one: AKSARBENT DOES NOT CONSIDER ITSELF MIDDLE OF THE ROAD, if for no other reason that the middle of any given road in Stothert's Omaha can be a risky place.

Kratochvil would disagree, of course. He said that mayoral issues are cyclical and that in the Omaha spring, roads are on everyone's mind.

That's easy for him to say. He lives in Overland Park, in fabulous Kansas, home of the Koch Brothers and and Kris Kobach, he of the GOP voter elimination databases which strike black voters from the rolls by the hundreds of thousands whenever their first and last names match someone else's, even if their middle names don't.

Point two: AKSARBENT DOES NOT CONSIDER ITSELF TO BE ANGRY!

No, we are righteously indignant. 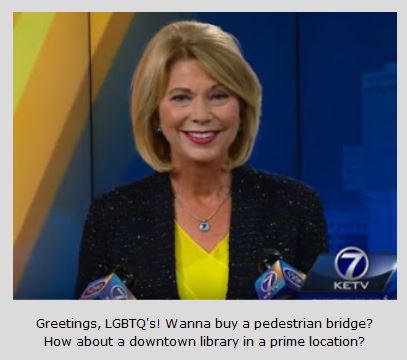 You, know — like when you get when Jean Stothert smiles into a television camera and says she told her pet LGBT Advisory Board (concocted for her reelection, though she denied it) that there was no reason to address LGBT housing bias because they are covered under "federal law".

Lies told that cheerfully and unscrupulously could make a boy very indignant.

But angry? How could we be angry after writing so many tweets and posts about the Nebraska and National GOP clown car, at times so gut-bustingly funny that it could replace abdominal crunches—or Bill Kintner?

Angry would better define some of the raw nerve fringe groups that Stothert pandered to during her campaign, like that local gun nut contingent that is boycotting (seriously) MAT, the zoo, OPPD, the Holland Center, PayPal, Brewskys and even Chuck E. Cheese for not allowing firearms on their premises.

We never suggested that Kratochvil should be outed from the comfortable secrecy of his virtual LeavenworthSt kennel, even when he was using a pseudonym, although that brings up an interesting point.

When Kratochvil took his sabbatical to reelect Helen Wheels, he said he was turning over the keys to his blog to somebody who called himself "I Am Spartacus." (Please!)

Spartacus, you will recall, violently attempted to overthrow an oppressive oligarchy. — as if someone so named would write, (or type, as Truman Capote might say) for LeavenworthSt — never a champion of proles, though often a bridge over troubled trolls.

In respect of anonymity, let's ponder the following, shall we?

A number of LeavenworthSt posts during Kratochvil's supposed absence sure looked a LOT like stuff he wrote before and after. When Kratochvotil returned from the Stothert GOP plantation, he wrote this: "As part of the deal, I did not have a byline on Leavenworth St."

That's not the same thing as not secretly writing for it, is it?
Posted by Enzo