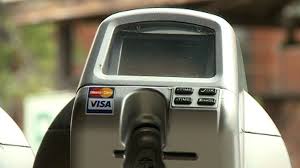 You've seen that Mello ad in which he ticks off property taxes, sewer taxes and the restaurant tax, ending with him brandishing a restaurant bill and saying "It's all too much!"
This is weak, because Mayor Stothert isn't solely responsible for any of those taxes, not even the restaurant tax she deplored when running against Suttle, then ignored when her administration benefited from it — however badly she may be handling their imposition.
Even the extension of the restaurant tax to food trucks on Stothert's watch is defensible. Why should Whoppers handed out the window of a Burger King be restaurant-axed, but not tacos handed out the window of a food truck?
What Mello totally missed is the one increased fee, affecting hundreds of thousands of Omahans, that Stothert totally owns: a hugely irritating expansion of parking meter fees.
We're not historians, but we'd guess that thousands of Omahans who grew up here and are old enough to be on Medicare never in their life had to feed a parking meter on a Saturday or after 5 on a weekday — until Jean Stothert became mayor.
This is a provocative political issue and something Team Mello is apparently completely blind to.
Here's how that ad which ended in a restaurant with Mello's disapproval of his restaurant-taxed tab SHOULD have ended:


Family exits restaurant to find a parking ticket tucked under the windshield wiper. Mello picks up the ticket, looks at his wife, and says: "On a SATURDAY?"
Then Mello's wife, instead of being a voiceless political prop in her husband's campaign ads (in this respect Mello is just too, too traditional) should have said, with wry, sarcastic resignation: "Welcome to Jean Stothert's world!" Last image in the ad, with the vote for Mello verbiage, should have been of a parking meter.


And don't get us started on the fact that in Lincoln, people summoned for jury duty can park in a their own free lot, unlike here.
Posted by Enzo