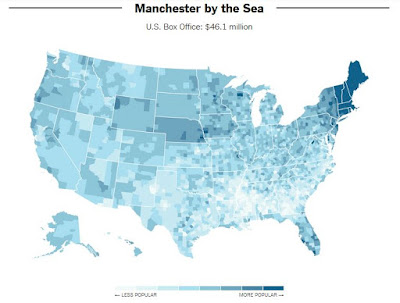 Hollywood Studios don’t disclose ticket sales by region, so the New York Times did the next best thing:


...looking at how many active Facebook users in a given county “liked” each of the nominees. Studios increasingly use Facebook as a home base for films, with photos, videos and news regularly fed to fans.

The Times even published maps for each Best Picture nominee. To a Cornhusker, one map stuck out like a Bill Kintner tweet: the one for Manchester By The Sea. Ninety-one of the state's 93 counties liked this movie; it was more uniformly favored than any other film nominated for Best Picture.
Only two counties were outliers: Banner and Scottsbluff, and we don't know what their deal is, although it should be noted that they didn't hate the film either.
Why Manchester By The Sea has such a hold on the state, from Omaha to Alliance, baffles us. Do land-locked farmers fantasize about the seashore? Does Lionsgate have better distribution for its films here? Does the vanilla cast of the cast appeal to rednecks? Search us. Maybe Nebraska simply has better taste in films than in politicians.
However Manchester puts asses into seats (as they say in showbiz) its ticketholders are in for an magnificent film experience (watch the fire scene, below this paragraph); should the movie lose the Best Picture trophy to LaLa Land, there will be a lot of slow simmering among critics and AKSARBENT be spitting nails right along with them.