Trump misogyny provokes thousands of Omahans to march: 'We need a leader, not a dirty tweeter!' 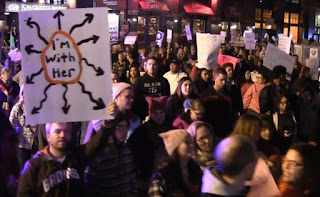 AKSARBENT recorded the ENTIRETY of today's Women's March on Omaha as it snaked through the Old Market.
If you marched, you're probably in the video. We hope to have the whole thing up by midnight or so. If not, check back tomorrow Tuesday (but not early!)
UPDATE: Even though the complete video isn't up yet, we posted another, better excerpt than the one below, here.
Our estimate of the crowd was (conservatively) between 6720 and 9580. We arrived at that seat-of-the-pants reckoning by noting that as the marchers turned north on Howard onto 11th, they were funneled into the comparatively narrow space between reconstruction of the M's building and one of the Old Market's big circular planters on the east side of 11th, accommodating about 10 people abreast, more or less. The crowd's density was surprisingly uniform, and we guessed 2-3 seconds, on average, for each group of 10 to turn onto 11th, depending on the speed of the crowd, which waxed and waned. We counted the seconds in the video in which people were actually exiting the video frame and used that for our rough calculation.