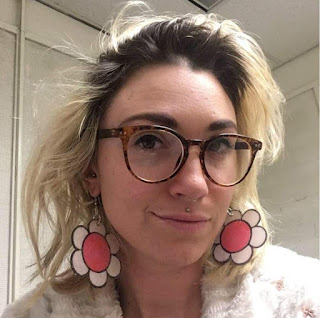 Lincoln native Nicole Renae Siegrist, 29, who went by the name Denalda, has been identified by Oakland, California authorities as one of the victims of that city's warehouse fire last week, which may have been caused by a refrigerator.
She was the keyboard player for the synthpop group Introflirt.  Ben Runnels, the lead singer/guitarist, also died in the fire.
From the AP:


They named their last album "Temporary Heaven" to describe the fleeting nature of life and the moments of happiness when people feel completely comfortable with who they are, no matter how different from others they may be, said Brendan Dreaper, who helps operate Mixtape, the Oakland-based company that managed Introflirt.
That's also the message the two friends would want the world to remember about their music, Dreaper said. They dubbed their sound "croonwave" and made it their mission to create a "soundtrack for the insecure," according to Mixtape.
"You may feel like an outsider, but that's your advantage in life," Dreaper said. "They were completely comfortable with being themselves. I think they did achieve that. I know people connected to them. The music did that for them, as well. It made them feel happy about themselves."
Runnels, who played guitar and sang, was introverted but connected to people through his music, Dreaper said.
Siegrist, who played the synthesizer, was an outgoing "free spirit" who used herself as a canvas, painting black streaks or bold marks on her face to contrast with outfits like a veil, halo of flowers and white dress.


As a Lincoln resident, Segrist — who went by Denalda Nicole Renae — was a highly active and beloved member of its music scene, most recently performing as electronic project Vanfantom. She was also in the band Two Black Cats with Bryan Klopping, Amy Gordon and Sam Segrist, as well as The Heroic Little Band of Rebels with Travis Beck and Ian Egenberger.
Our hearts go out to her family and friends, and to all those affected by the tragedy. If you would like to share thoughts on Nicole for publication, reach out to news@hearnebraska.org

Below, Introflirt's live performance of the chillingly-named Orange Light, from its album, Temporary Heaven: