Debbie Reynolds dead at 84, a day after death of daughter, Carrie Fischer 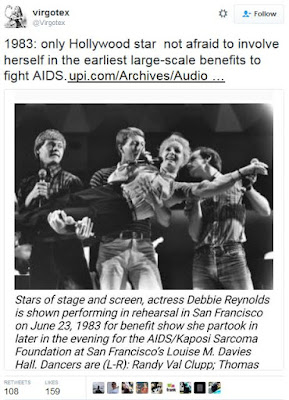 Debbie Reynolds, one of the last studio system stars, passed away yesterday following a stroke suffered while making funeral arrangements for her daughter, Carrie Fischer, who died Tuesday after a heart attack aboard a plane. Both mother and daughter became stars at 19, the former for her role in Singing in the Rain and the latter for hers in Star Wars.
Reynolds was the first big star to raise money to fight AIDS, even before Elizabeth Taylor, at a time when virtually no celebrities wanted to be associated with the issue.
Reynolds, born in El Paso, Texas, went to school on the MGM lot with Liz Taylor, who later broke up her marriage to singer Eddie Fischer after her husband, Mike Todd, died in a plane crash. From People:  As Reynolds later put it, Taylor “liked [Eddie] enough to take him without an invitation.”
Taylor and Reynolds became friends again when each booked passage on a cruise without the other knowing.
Reynold's second and third husbands (respectively, a gambler and an inept businessman) left her in financial ruin. At one point she kept up appearances (and contacts) by attending Beverly Hills parties while living in her car.
She was discovered at 16:


She had planned to be a gym teacher but at 16 won the Miss Burbank beauty contest doing an imitation of her idol Betty Hutton performing. Reynolds had entered for the free blouse and scarf promised each entrant.
The contest judges — studio talent scouts — were so impressed with her naturalness that they flipped a coin to see who got to interview Reynolds first. Warner Bros. won, and she rode her bike to the screen test.

In 1996, Reynolds received some of the best reviews of her career for her stint in Mother playing opposite Albert Brooks:


In her review, Janet Maslin wrote that Ms. Reynolds played the role “divinely,” and showed off “both acting expertise and apparent training at the International Mothers’ School for Passive-Aggressive Bedevilment of Children.”

Here's Reynolds in Singing in the Rain and Tammy and the Bachelor (costars: a young Leslie Nielson and Fay Wray!) and at Victoria's Secret in Mother: