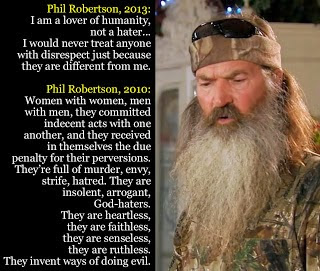 Duck Dynasty dry drunk Phil Robertson's old man sancti­mony has a nasty, violent provenance but Robertson blames that history on Satan and a permissive 60s culture — not himself — insisting that outside forces were responsible for the eight years of liquor and substance abuse in his 20s during which he savagely beat a bar owner and his wife over a rent dispute, sending them to the hospital and forcing his wife and small sons to fend for themselves while he hid in the woods of a neighboring state from the Louisiana State Patrol for four months.
After repeatedly kicking his wife and kids out of the house, Robertson finally straightened up.
Now, Robertson is offering his spiritual counseling services to Donald Trump, since his first choice, Ted Cruz (who attended an Iowa confab at which at least two "death to gays" preachers spoke), is presidentially indisposed for the foreseeable future.
Here's what an Atheist husband and father thinks of Phil Robertson's version of morality.
Posted by Enzo