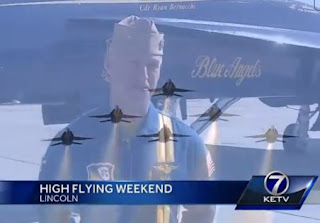 KETV's segment tonight on the the so-called "Guardians of Freedom" military air show this weekend in Lincoln wasn't one of the station's best efforts. In fact, it was a cringeworthy piece of puffery by Andrew Ozaki, normally a terrific reporter:


The Nebraska National Guard, Lincoln Chamber and Airport Authority put on the free show every five years. It's a chance to showcase the military [sic] finest, including the Air Force's new F-22 Fighter, and possibly inspire young kids to dream about being in the cockpit some day...
"The smiles on the kids faces really make it such a special experience," [Blue Angels Cmdr. Ryan] Bernacci said.

Maybe those kids wouldn't be smiling so much if they knew how much potential college education money has been spent on boondoggle programs like the F-22.
The $79 billion F-22 fleet, supposedly operational since 2005, has been grounded multiple times while the Air Force investigated its oxygen problems. Not until late 2012 did the service believe it had fixed the problems.
Perhaps the egg-sucking Air Force PR tool contingent at KETV should watch its own network. ABC News said this about the F-22 in 2014:


The next generation Raptor, which has a total program price tag north of $79 billion, had sat out two wars and at least one previous smaller conflict since going operational in late 2005 before being called on to hit a single target in Syria Monday: an Islamic State of Iraq and Syria (ISIS) "command and control building."

The plane has killed at least one pilot. Others have blacked out in it and still others have refused to fly the thing.


From 2008 to 2012 pilots reported experiencing confusion, sluggishness or disorientation – sometimes even blackouts – at the controls of the plane more than two dozen times. In one instance, a pilot became so disoriented that his plane skimmed treetops before he was able to pull up and save himself. In May 2012, two Raptor pilots told CBS News’ “60 Minutes” they were too afraid to fly the plane.

In another, more drastic case, Air Force pilot Capt. Jeff Haney died in a crash in 2010 after the oxygen system in his plane malfunctioned. After an investigation, the Air Force faulted Haney for failing to fly the plane properly while suffering a “sense similar to suffocation.” The plane’s manufacturers eventually settled a wrongful death lawsuit with the Haney family.