Pastor Weasel, stopped in airport with loaded handgun, asks god why he made this mistake again 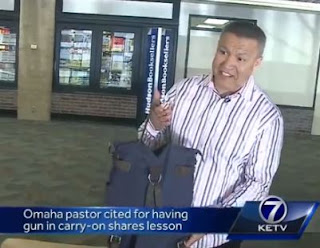 This time they're going to throw the book at him and it won't be a bible.


"When it occurs twice with the same individual, it warrants prosecution," Omaha interim city prosecutor Tom Mumgaard said.
Mumgaard charged Weasel with a misdemeanor: carrying a concealed firearm in a restricted area.
"If you have a concealed weapon permit, you have an additional responsibility that comes with that permit and that is to at all times know where your weapon is," Mumgaard said.

Weasel, AKA "Dobie" (!), told KETV that he has asked god why he made this mistake twice and now he knows: it's not his fault, it's god's:


"...perhaps he's trying to use this so others can learn from my mistake and then perhaps he's using this to teach me, so that something worse wouldn't happen,"

Weasel isn't the only Omahan who has had trouble keeping track of his gun.
Posted by Enzo