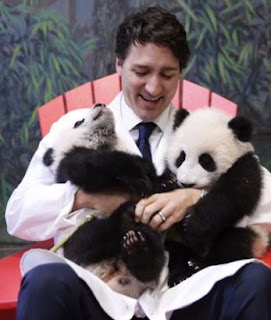 AKSARBENT refuses to put up egg-sucking blog posts about social media idiot-savant and "reality TV" star Kim K. because she's a trivial person and because we cannot spell her last name. Also, why would any sane gay male do that when there are twitter pictures available of Canadian Prime Minister Justin Trudeau with a baby panda on each one of his thighs?
Pandas are adorable when they're young, but as they age, they can become mean and even dangerous to humans, like raccoons or Sen. Mitch McConnell.
Posted by Enzo