The Lincoln Journal-Star has more:


A state senator from Lincoln is calling for an investigation into whether faith-based adoption agencies in Nebraska are violating federal law by discriminating against potential adoptive or foster parents based on religion.
The move by Sen. Adam Morfeld comes after three Nebraska child placing agencies said they would refuse to work with families who are not active in their local churches.
"All of these admissions raise serious questions about whether these contractors are in violation of state law, federal law and executive orders," Morfeld wrote Monday in a letter to Courtney Phillips, CEO of the Nebraska Department of Health and Human Services.
Morfeld said he plans to notify the federal government of his concerns as well.
The three agencies are supporting a measure (LB975) by Sen. Mark Kolterman of Seward which would protect them from adverse action by the state — including denials of funding — if they decline to serve certain people based on the agencies' sincerely held religious beliefs.

We found an incisive comment in response to the Journal-Star's earlier story about the LB975 hearing, which starkly illuminates the scope of immunity being proposed for discriminatory private adoption agencies in Nebraska by LB975: 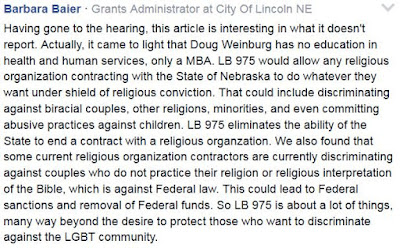 Morfield, a staunch supporter of LGBT rights, will try again to pass LB586, an antiLGBT bias measure he had to table last year. During that legislative session, he had a heated exchange with an LGBT rights opponent during a hearing for LB647, a bill giving LGBTs more rights in state adoptions: