Here's Securus's game: It and other price-gouging phone companies collude with jail and prison authorities throughout the U.S. to overcharge inmates and their families for phone calls and "in-person" video conferencing even when visitors travel to the jail.


Since mid-2014, three separate lawsuits have been filed against Securus, directly pertaining to its practice of requiring jails to eliminate in-person visits in favor of video visits. The video visits cost as much as $20 for a 20-minute video call -- and the jails typically receive a commission on each call.
In a statement on Monday, Securus chief executive Richard Smith said the company has amended its contract language so that it will no longer obligate jails to remove “person-to-person contact” in favor of its video technology.

Securus shares the revenue with generous kickbacks to keep greedy county sheriffs happy and under contract. The legalized swindle has gotten so bad that in October the Obama Administration convinced the FCC to cap the cost of phone calls between prisoners and their families, which can cost as much as $14 per minute.
But as one outrageous action by Securus was nullified by the government, another huge one has come to light. On November 11, an enormous cache of phone records was leaked by a hacker to The Intercept, revealing a major breach of security:


The materials — leaked via SecureDrop by an anonymous hacker who believes that Securus is violating the constitutional rights of inmates — comprise over 70 million records of phone calls, placed by prisoners to at least 37 states, in addition to links to downloadable recordings of the calls. The calls span a nearly two-and-a-half year period, beginning in December 2011 and ending in the spring of 2014.
Particularly notable within the vast trove of phone records are what appear to be at least 14,000 recorded conversations between inmates and attorneys, a strong indication that at least some of the recordings are likely confidential and privileged legal communications — calls that never should have been recorded in the first place. The recording of legally protected attorney-client communications — and the storage of those recordings — potentially offends constitutional protections, including the right to effective assistance of counsel and of access to the courts.
“This may be the most massive breach of the attorney-client privilege in modern U.S. history, and that’s certainly something to be concerned about,” said David Fathi, director of the ACLU’s National Prison Project. “A lot of prisoner rights are limited because of their conviction and incarceration, but their protection by the attorney-client privilege is not.”

To make matters worse, the 14,000 calls in Securus's database between lawyers and prisoners may not be the complete extent of Securus's likely illegal behavior. Those calls were identified by the hacker by cross referencing lists of call records kept by Securus and lists of law firms and do not include calls made to lawyers on their personal cell phones. 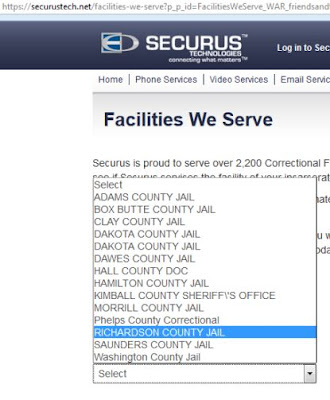 AKSARBENT has discovered, via Securus's own web site, that 13 county jails in Nebraska have phone services contracts with the dubious firm. (Securus is apparently so sloppy that the Dakota County Jail is listed twice on its website.)
Any of the recorded (or monitored) conversations which took place between an inmate at those 13 Nebraska facilities and is documented in the hacked records could be the basis of a suit by the ACLU or anyone else on behalf of a prisoner or attorney with standing.
All of which could prove to be very expensive to taxpayers in the jurisdictions of quick-buck Nebraska county sheriffs who play ball with a predatory corporation at the expense of a captive audience of impoverished inmates and their families.
Posted by Enzo