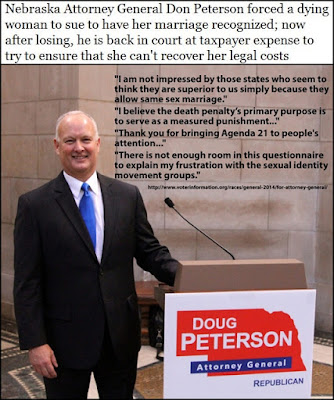 Lancaster County District Judge John Colborn clarified an earlier ruling striking down the state's 1995 ban on gays and lesbian foster parents and in so doing has sharply rebuked Nebraska Attorney General Doug Peterson, who has repeatedly squandered tax dollars by pursuing various legal maneuvers to forestall gay marriage.
Peterson unconvincingly argued that Colborn had erred in overruling the state's LGBT ban, since the state discreetly stopped enforcing the prohibition in 2012.
Colborn's amended order said it “defies common sense” for a government agency to adopt a new policy without rescinding or replacing a previous policy that was at odds with the new one.
Posted by Enzo