Throwback Thursday: Walt Disney hanging with the boys on a South American beach 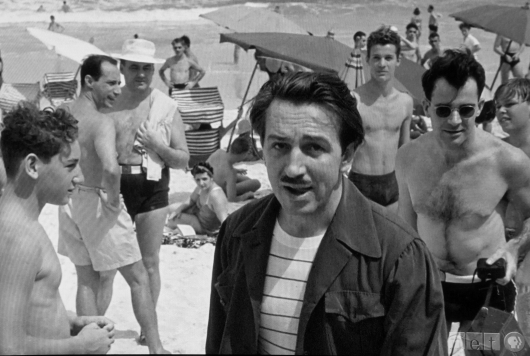 This photo will do nothing to throw cold water on persistent rumors about Uncle Walt's supposed bi- or homosexuality. The picture was taken during a cartoonist's strike in 1941 during which Disney took out a full page ad in Variety attributing the malcontentedness on the Disney plantation to "communistic" influences and not the fact that some Disney artists made $12 a week with no overtime while others made hundreds. In his absence, Walt left union negotiations to his brother Roy, who gave the union commies nearly everything they asked for. When Walt returned, he had his secretary separate the strikers' files from those who didn't picket, for future retribution. The screencap is from this week's American Experience two-part bio on Disney.
One priceless moment from the documentary is film of Walt doing the voice-over for Mickey Mouse. Trust us, the clip is hilarious. We bet Walt was a riot in the sack with whomever he may or may not have slept with besides his wife.