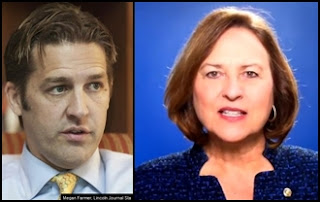 In the Senate, the so-called First Amendment Defense Act is called S. 1598. The House version, H.R. 2802, is sponsored by Jeff Fortenberry. Like much of what Sasse and Fischer and Fortenberry do and say, the bill is completely bogus. Here's what the New York Times wrote:


It would do many things, but one thing it would not do is defend the First Amendment. To the contrary, it would deliberately warp the bedrock principle of religious freedom under the Constitution.
The bill, versions of which have been circulating since 2013, gained a sudden wave of support after the Supreme Court legalized same-sex marriage nationwide. It is being hawked with the specter of clergy members being forced to officiate such marriages. This is a ploy, as the bill’s backers surely know: There has never been any doubt that the First Amendment protects members of the clergy from performing weddings against their will.
In reality, the act would bar the federal government from taking “any discriminatory action” — including the denial of tax benefits, grants, contracts or licenses — against those who oppose same-sex marriage for religious or moral reasons. In other words, it would use taxpayers’ money to negate federal anti-discrimination measures protecting gays and lesbians, using the idea of religious freedom as cover.
For example, a religiously affiliated college that receives federal grants could fire a professor simply for being gay and still receive those grants. Or federal workers could refuse to process the tax returns of same-sex couples simply because of bigotry against their marriages...