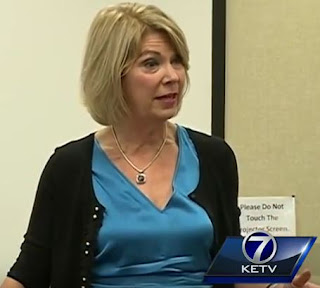 Mayor Jean Stothert insisted before God* and KETV that doubling some meter rates, extending hours to 9 from 5 pm and charging people to park on Saturday was NOT a "money grab." (Unlike, perhaps, her administration's recent annexation binge.)
She claimed it was because parking administration costs the city more than it brings in.
Begging the Republican question: "Well, then, why don't you rip up the meters, sell Omaha's parking garages to private enterprise, and get the city out of the parking business?"
But we digress. While Stothert said one thing in her press conference, Ken Smith, the city's Parking Division manager, said something else to the World-Herald: "Our goal is to increase turnover outside businesses and free up spaces so that customers and visitors to the downtown area can more easily find parking spaces."
And what about people who work downtown?


Many downtown employees, such as wait staff at restaurants, are likely to be less than thrilled about the changes. Asked about that Wednesday, Smith predicted that the changes will benefit restaurant workers, because easier parking would generate more customers.

Hi! We're Republicans from the government Stothert administration and we're here to help you get more customers!
Readers will note Stothert's exquisite sympathy for the flawed cognition of drivers circling the Old Market who might disagree with her assessment: “We have enough parking spaces downtown,” Stothert said. “It’s just that people perceive we don’t.”
________________________________
*We don't know if Stothert actually goes to church regularly on Sundays, but she was so conspicuously pious while on Omaha's City Council in reciting prayers before meetings that you might have thought she mistook the governmental chamber for a chapel.