How radically right wing is Deb Fischer, really? Read this, from her website: 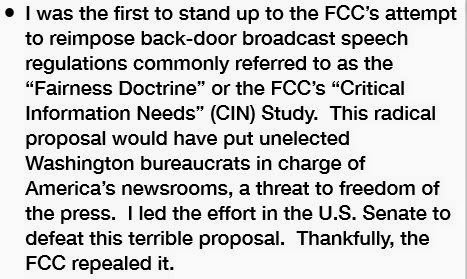 Seriously? Does Fischer really think her base is that stupid? On what planet does requiring broadcasters using publicly-owned airwaves to present both sides of controversial issues constitute "speech regulation"?
Fischer has the shameless chutzpah to call broadcasting's Fairness Doctrine "radical," even though it was in effect for almost four decades, from 1949 until Reaganites killed it in 1987, in order to clear the way for what is now a slew of right-wing radio nutbags like Rush Limbaugh and Michael Savage.
The only thing radical here is Fischer, herself.
Here's a fair and balanced Wikipedia explanation of the government policy whose attempted resuscitation she called "terrible."


The Fairness Doctrine was a policy of the United States Federal Communications Commission (FCC), introduced in 1949, that required the holders of broadcast licenses to both present controversial issues of public importance and to do so in a manner that was, in the Commission's view, honest, equitable and balanced. The FCC eliminated the Doctrine in 1987, and in August 2011 the FCC formally removed the language that implemented the Doctrine.
The Fairness Doctrine had two basic elements: It required broadcasters to devote some of their airtime to discussing controversial matters of public interest, and to air contrasting views regarding those matters. Stations were given wide latitude as to how to provide contrasting views: It could be done through news segments, public affairs shows, or editorials. The doctrine did not require equal time for opposing views but required that contrasting viewpoints be presented.
The main agenda for the doctrine was to ensure that viewers were exposed to a diversity of viewpoints. In 1969 the United States Supreme Court upheld the FCC's general right to enforce the Fairness Doctrine where channels were limited. But the courts did not rule that the FCC was obliged to do so. The courts reasoned that the scarcity of the broadcast spectrum, which limited the opportunity for access to the airwaves, created a need for the Doctrine.