Megan Fox (not the actress, who is undoubtedly much smarter) is QUITE suspicious of all the unsupportable evolutionary claims of Chicago's Field Museum, respected by many, but CERTAINLY not by Fox, whose faith-based skepticism demands to know how the museum knows what happened hundreds of millions of years ago without any video camera evidence. Below, her indignant, learned audit of the museum's tetrapod exhibit: 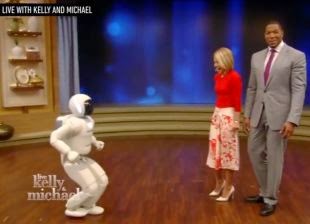 "Tetrapods took their first steps around 307 million years ago."
Who writes this stuff? How do they know this? They don't!
...Maybe they always had feet like that. Maybe that's the way they were made. With feet. Like alligators, you know, that are in the water AND the land? It's not like their fins fell off and then they grew feet. That's what they want you to believe: that the fins eventually fell off and then they grew some feet and they started walking on the land. This is the dumbest theory I've ever heard in my whole life. It's not good. It's really not good. It's bad. It's very bad...
Do you know how complex feet are? ...Human feet are so complex that people who make robots have not been able to replicate feet. They can't make a robot with the same-dimensioned feet as a human being 'cause it won't stand up.

For some reason, comments on scholarly Megan Fox's video exposing the bad science of the Field Museum have been switched off, which is a shame since her startlingly revelatory discourse is rapidly going viral.


(Via JoeMyGod via Raw story)
Posted by Enzo