Amy Goodman gets flashed by Russell Brand on TV 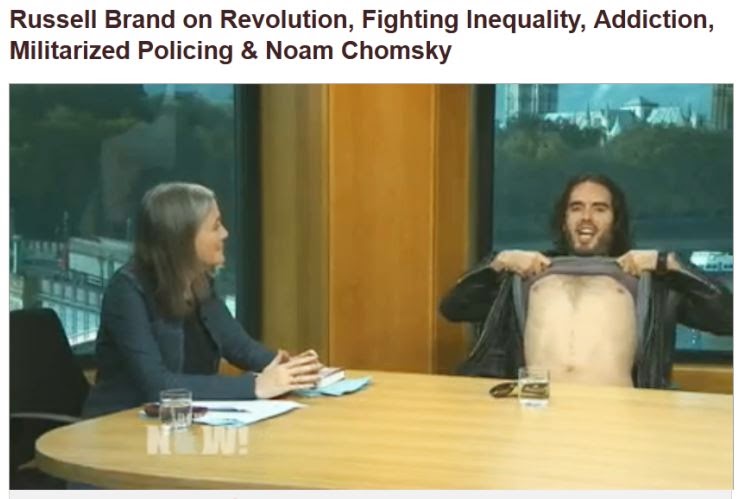 This was well into the show, recorded in London, and was followed by a clip of Noam Chomsky at the U.N. wishing out loud that the U.S. would at least obey its own laws if it can't obey international ones, citing its massive support of Israel in contravention of domestic legislation prohibiting support of governments which systematically suppress human rights.
Brand may have been frustrated and seeking an outlet after Goodman's clear admonition to him that he would not be allowed to swear during his appearance because Democracy Now! is broadcast over the air in some locations.
Following that, Ms. Goodman seemed to backpedal when reminded by Brand that she had revealed that Noam Chomsky once bit her father at summer camp.
Goodman, clearly in a revisionist mood, now maintains that she might have confused Chomsky's biting wit for something more visceral.
Brand then drew a connection between the alleged incident and the name "CHOMPsky."


NOTE: After seeing the above, AKSARBENT went to sleep and, upon waking, wondered if the memory of all this was from a bizarre dream (in which case it could not be blogged) or from reality. We were relieved to find the web page still open in our browser and the post almost completely written.