59 senators just voted to raise Midwest gas prices by up to 40 cents per gallon: here are their names

The vote (S.2280) was another attempt to force approval of the TransCanada Keystone XL pipeline from the Canadian border to Houston.
This isn't an oil pipeline; it is diluted bitumen ("dillbit"), an abrasive pipe-destroying goo which won't flow unless thinned with carcinogenic solvents whose exact composition TransCanada refuses to disclose to the landowners it has threatened with eminent domain condemnations even though it doesn't yet have a permit to build the pipeline.
Also, the stuff must be pressurized up to 1600 PSI (conventional crude flows at 600 PSI) and heated up to 160 degrees.
Because unusually toxic dillbit isn't technically oil, TransCanada (and Exxon, for that matter) refuse to kick in eight cents per barrel to the Treasury Department's Oil Spill Liability Trust Fund. Last week, when House Democrats tried to require the Keystone XL pipeline project to do that, House Republicans shut them down in a 224-192 vote Nov. 14th.
California Sen. Barbara Boxer led the charge to defeat the bill, which needed 60 votes to pass but got 59. The legislation fast-tracks the construction of the extension to TransCanada's leaky Keystone 1 pipeline (which averaged 1 spill per month in its first year) across an extremity of the largest, purest underground aquifer in North America, which, in Nebraska alone, fuels a $20 billion ag industry.
Apologists have claimed that the pipeline will create lots of U.S. jobs.
It won't; few of the jobs will be permanent. (TransCanada is even buying pipe from India.)
Boosters also claim that the pipeline will create energy independence for the U.S.
That is also nonsense; the pipeline is through the U.S., not to the U.S. The product will be refined in Houston and sold on the world oil market to the highest bidder.

As Sen. Boxer correctly noted, Keystone XL WILL RAISE MIDWEST GAS PRICES. Consumer Watchdog says the increase will be up to 40 cents per gallon.
Don't believe it? Then read the TransCanada email revealing that the company thinks the pipeline could increase what U.S. Midwesterners pay for oil BY ALMOST TWO BILLION DOLLARS per year.

Here are the 59 senators who voted to increase TransCanada's profits at the expense of consumers in the Midwest: 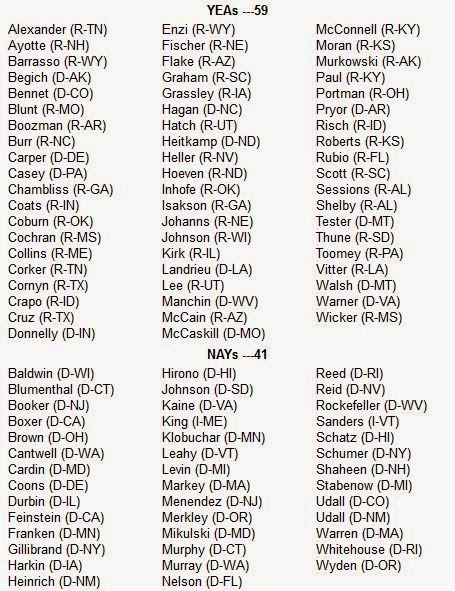