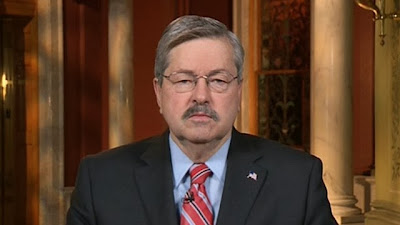 In July, Branstad said, at a press conference: "I don’t want to see another incident like this one."
Since, presumably, the governor has the last word on how fast he is driven by state troopers, AKSARBENT interpreted Branstad's remark as an arrogant public threat to the Iowa State Patrol not to embarrass him further.
It hasn't, but a Franklin County deputy,  according to the Cedar Rapids Gazette, pulled over a vehicle with the governor inside on Aug. 27 and gave the Iowa State Patrol driver a written warning:

The speed wasn't included on the written warning. But the Franklin County Sheriff said 10 mph over the posted limit is the threshold for issuing a ticket, so that seems to put the speed at 64 mph.     Two of the three Democrats running for governor in 2014 quickly put out Friday press releases that slammed Branstad. Tyler Olson, a state representative from Cedar Rapids, contended that Branstad "continues to think he is above the law."
State Sen. Jack Hatch, D-Des Moines, sorta referenced what Ronald Reagan said to Jimmy Carter in a 1980 presidential debate with the opening line of his release.
"There he goes again. Did he not learn anything from the public outcry over the summer? No one is above the law in this state. His refusal to release reports of possible previous incidents seems to mean that this behavior is a pattern. I call on him to release a full report on the times that his security detail has been pulled over," Hatch said.