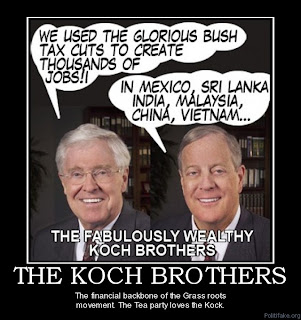 Last week AKSARBENT noted the Karl Rove radio assault on former governor and senator Bob Kerrey, who is merely back in Nebraska to sound out acquaintances on a possible bid to replace Democrat Ben Nelson following his retirement.

Now it seems that just as Rove's American Crossroads attack ends, David Koch's Astroturf group, Americans for Prosperity, has picked up the trash-talk baton with a $105,000 radio and TV ad campaign against the gay-friendly Kerrey, who, as yet, hasn't made any announcement.

The ad ends with an invitation to sign a "petition" (which would involve giving personal information to the Koch organization) to "remind" Bob Kerrey that Nebraskans are against big government, intoned by a voiceover artist in a generic Hollywood Westerner accent that no one in Nebraska speaks.


The anti-Kerrey ad campaigns drew a quick response from Paul Johnson, the man who will manage Kerrey's campaign if he decides to become a candidate.
"It's pretty obvious that Karl Rove, the Koch brothers and their national organizations are terrified of someone like Bob Kerrey running for the Senate," Johnson said.
"What they fear most are independent leaders willing to do what's right for the country instead of serving as a lap dog for their self-serving agenda."