KFAB airs claim that 11-Worth protester tried to extort $500,000 from cafe; Omaha Mayor mets with Caniglia, cops & prosecutor to see if protesters can be charged with felonies

Note: the twitter video below contains edited (for time and emphasis) audio from KFAB.
To hear the unedited, broadcast version go to KFAB's web site podcasts,
at the link provided in this post's last paragraph

Today Omaha Mayor Jean Stothert meets with the police chief, city prosecutor & owner of a racist greasy spoon that protestors put a fork in last week, to see if any of them can be charged with felonies. KFAB aired accusations of a $500,000 extortion attempt by the organizer. pic.twitter.com/f5zvMugi62
— ＡＫＳＡＲＢＥＮＴ (@aksarbent) June 23, 2020

Until this month, the 11th-Worth Cafe, a greasy spoon at 24th and Leavenworth had, for 44 years, served food to blue collar denizens of one of Omaha's poorest neighborhoods.
That some of that food was named after Confederate General Robert E. Lee (a decades-long "fuck you" to black people) never seemed to bother owner Tony Caniglia Jr., until black (and white) Omahans appeared on his sidewalk last weekend, fit to be tied, and not only about Tony's menu-naming preferences.
Tony 2's son, Tony 3, recently drew rather attention when he apparently reacted to news about scattered vandalism during police brutality protests by urging, on Facebook, that cops' rubber bullets be replaced by real ones. "It's time to go lethal," he alleged wrote, adding that target practice be practiced.
Tony 2 (who isn't very good at do-it-yourself damage control) tried to social-media-distance himself from any racism in his restaurant or his child-rearing by protesting that protesters were "trying to link Tony Caniglia, owner of the 11-Worth Cafe to a negative post on face book that was not made by him."
This didn't impress many black Omahans, but KFAB's Gary Saddlemyer seemed to buy what Tony Caniglia was selling..
Saddlemyer is Omaha's rightwing version of Radio North Korea; on Monday he made it his AM drivetime mission to nail the 11-Worth Cafe to KFAB's Konservative Kross and canonize the Caniglias, with the help of always-available (to KFAB) Mayor Jean Stothert.
Without telling KFAB's gullible listeners why the Caniglias provoked so much revulsion that people took to the streets, Saddlemyer laid on the victimization narrative with a trowel.
(For a much more honest look at what happened, look to KMTV, the OmahaWorld-Herald or virtually any mainstream local news source.) 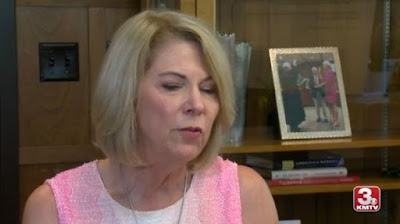 Saddlemyer went so far as to repeated the accusation, on air, accusations that David Mitchell, a protest organizer, tried to extort $500,000 from the Caniglias.
Mitchell has denied this, saying that another activist suggested that the Caniglias make a donation, and not to any individuals, but to the Malcolm X Foundation, which has emphatically denied any role in any of this. (Anyone who didn't know better could be forgiven for concluding from Saddlemyer's toxic insinuations that Mitchell was involved in a personal stick-up.)

As an aside, we think Gary Saddlemyer should read the only part of Nebraska's Theft by Extortion statute that could possible apply in his fictional scenario:


(1)(e), Bring about or continue a strike, boycott, or other collective unofficial action, if the property is not demanded or received for the benefit of the group in whose interest the actor purports to act;

The above applies only, one assumes, if whoever allegedly asked the Caniglias for a donation actually posed as an rep of the foundation, which is about as likely as Gary Saddlemyer apologizing for habitually broadcasting half-truths and/or rumors and then vowing to leave the state.
The Omaha Police Department, for its part, aren't taking the Saddlemyer/KFAB trash talk seriously, much to the likely dismay of Mayor Stothert who seemed very excited about the prospect of charging Mitchell with extortion on Monday's KFAB morning program. 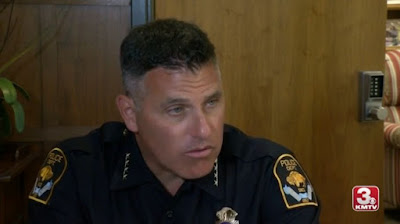 As for Stothert, she expertly shone as the Mistress of Innuendo. ("If some — not ALL, of course, but some! — of the black protestors have stabbed, burned and buried any of the Caniglias in their North Omaha back yards, I certainly would want to get to the bottom of it!")
But seriously, Stothert vowed to "confer" with the police chief, Tony Caniglia, and the city prosecutor to see if they could gin up any felony charges against people who are sick and tired of people like the Caniglias and are willing to say so on the sidewalk.
Anyone who doesn't already know how brazenly disingenuous Mayor Jean Stothert is should consider this: during Gary Saddlemyer's puffball interview, she recounted how abused she was when she met angry protesters on City Hall Plaza (who were demanding that she have club owner Jake Gardner charged for killing protester James Scurlock.) Video of Stothert shows her explaining that she as mayor cannot charge anyone with a crime; only prosecutors can do that.
That was then. Now, her hands don't seem to be as tied. Tuesday Stothert met with Tony Caniglia, Jr., the police chief, and the city prosecutor to see if any 11-Worth protesters can be charged with felonies.

At the top of this post is exclusive, but boring, video of the scary(!) protests Mayor Stothert and KFAB are so concernstipated about.
It is a highly edited (condensed for Twitter) version of some of the most disturbing parts of KFAB's 10-minute Monday broadcast. To hear the entire thing, go here, but don't listen while you're eating.
Posted by Enzo