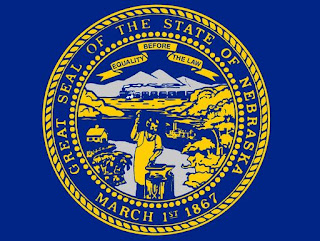 Today the New York Times looked at efforts to replace Nebraska's flag, so lackluster that it flew for several days outside the state Capitol in Lincoln upside down (while the Unicameral was in session) before anyone noticed. Like many state flags, it has a terrible design:

Mr. Hartvigsen’s organization suggests principles for successful flag design: simple concepts, a distinct look, bold colors and no words.
Nebraska’s banner violates nearly all of them.
“It’s a flag that would be easy to fly upside down with nobody noticing,” Mr. Hartvigsen said.


Last year, a new license plate design was tweaked after critics said it was historically inaccurate and sexually suggestive.

AKSARBENT covered that imbroglio here and OmahaLive! mocked it twice:

Nebraska's flag, created in 1925, is simply the state seal superimposed on a blue banner, and therein lies the problem.
You can't have an improved state flag without an improved state seal!
AKSARBENT sensibly suggests a state seal that is more like one of the following, although our ideal state flag would feature two baked cowboys bathing in a stock tank from which a cow and horse were drinking, with a whooping crane perched on the cow, and a windmill pump in the background on one side with a wind turbine on the other (old and new, get it?) and the Nebraska state Capitol in the background, tilting slightly to the right like on that painting which used to hang in P.O. Pears in Lincoln.