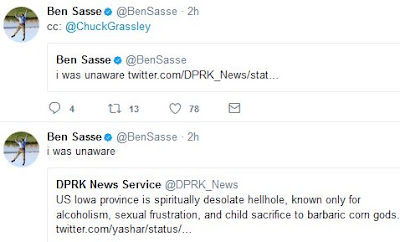 Early this morning, Nebraska Senator Ben Sasse trolled Iowa Senator Chuck Grassley (and Twitter) by retweeting a bizarre North Korea tweet about Iowa alcoholism, sexual frustration and child sacrifice to barbaric corn gods. (Yeah, that looks like something from The Onion, but what agitprop from Asia's biggest open-air prison camp doesn't?)
Though this was doubtless a publicity stunt joke, Sasse does have issues with Iowa's GOP, as well as Nebraska's. Earlier this week, Iowa's GOP chair, Jeff Kaufman, blasted Sasse twice, first in a warm-up for Donald Trump's appearance Wednesday in eastern Iowa and later in a follow-up inerview.


“We had Sen. Ben Sasse from Nebraska, he crosses the Missouri River, and in that sanctimonious tone talks about what he doesn’t like about Donald Trump,” Kaufmann said. “You know what, Sen. Sasse? I really don’t care what you like. We love Donald Trump. And if you don’t love him, I suggest you stay on your side of the Missouri River.”
...“He’s an arrogant academic,” Kaufmann said of Sasse, a former college president. “He’s sanctimonious. His statements are geared toward what can help him. He’s arrogant. And he’s not a team player, when in reality the only reason he’s got any clout at all in the Senate is because the Republican Party has the majority.”

Sasse (yes, there's a youtube video ridiculing his name) has reputedly hired a social media consultant to raise his profile, although Bill Maher probably did that better during their recent exchange on HBO's Real Time, when Maher made his infamous "house nigga" crack. Sasse claims he winced. If he did, it wasn't visible in the recording.

Sasse is also hawking his new book of Captain Obvious advice about parenting, replete with some alarming observations, like the upside of having polio:


"No one should regard the eradication of polio as anything but a glorious blessing, but we should also be able to recall that many older folks we know grew their character by fighting through their polio."

(Yeah, the way Mitch McConnell grew his character by overcoming polio and then becoming the Darth Vader of the Senate and defunder of Medicaid.)
Sasse votes with Donald Trump about 97% of the time and has fallen in line to rubber stamp all his abysmal Cabinet nominees, but he poses as a rebellious independent, critical of Trump.
Those of us who have lived in Nebraska awhile can see through his efforts to become the reverse image of former Nebraska Democratic Senator and Governor, Teflon Bob Kerrey.
Unlike Sasse, Kerrey, who lost a limb in Vietnam, was as close to the real deal as you will find in politics. (Kerrey was reputed to have studied the rise of California Gov. Jerry Brown, Jr., who supposedly studied Robert Redford's character in The Candidate.)
Kerrey is a lot funnier than Sasse. When reporters asked the then-governor what sparked his romance with actress Debra Winger when she was filming Terms of Endearment in Lincoln, he deadpanned: "She swept me off my foot."
What does AKSARBENT think about Sasse's tweet? This, friends:

P.S. The fake Twitter account started by a Nebraska expat football fan (now a Chicago lawyer) back when Bo Pelini coached Nebraska, weighed in too, and again proved why @FauxPelini has over half a million twitter followers: