Omaha's Fox42 gets daily "must run" orders to air right-wing propaganda. But the edicts aren't from Fox

Although the network affiliation of Omaha's KPTM (Fox42) is with Fox, the station is actually owned by Sinclair Broadcast Group, the ultra-right wing behemoth.
Sinclair has a history of outrageous conservative bias. In Nebraska, it owns KWNB-TV in Hayes Center, KHGI in Kearney-Hastings, KFXL in Lincoln, KHGI-CD in North Platte,  and KPTM and KXVO in Omaha.
Sinclair is in the process of acquiring Tribune Media properties and soon may challenge Fox as a right-wing media power center.
The New York Times has revealed that "must-runs" arrive every day at TV stations owned by the Sinclair Broadcast Group.
In 2004, Sinclair fired its own Washington, D.C. bureau chief for telling the Baltimore Sun that a 45-minute film the firm planned to air on its stations, "Stolen Honor: Wound The Never Heal" was "biased political propaganda" targeting then-candidate John Kerry. 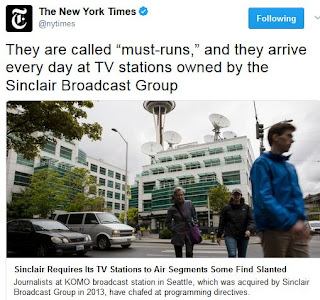 The Times noted that since November 2015, Sinclair has ordered its stations to run a “Terrorism Alert Desk” daily segment that the company provides, and that during last year's presidential election, Sinclair distributed video that suggested in part that voters should not support Hillary Clinton because the Democratic Party was historically pro-slavery.
There was more:

In late 2013, for instance, after The Seattle Times wrote an editorial criticizing Sinclair’s purchase of KOMO, Sinclair ordered KOMO to do a story critical of the newspaper industry, and of The Seattle Times in particular, according to two of the people interviewed.
KOMO journalists were surprised in January when, at a morning planning meeting, they received what they considered an unusual request. The station’s news director, who normally avoided overtly political stories, instructed his staff to look into an online ad that seemed to be recruiting paid protesters for President Trump’s inauguration. Right-leaning media organizations had seized on the ad, which was later revealed as a hoax, as proof of coordinated efforts by the left to subvert Mr. Trump.
Only after reporters had left the room did they learn the origin of the assignment, two of them said: The order had come down from Sinclair.