What the world's best-preserved mummy shares with Madonna, Elton John and Lauren Hutton 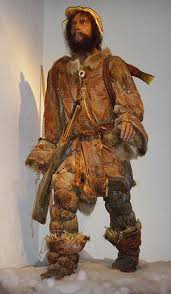 Ötzi (not his real name) lived on the Italian/Austrian border 3,300 years ago near the crest of the Ötzal Alps.
He was 45, plus or minus 6 years and had a 3mm gap  between his two upper front, teeth a condition which Madonna, Elton John, Lauren Hutton and Alfred E. Neuman also have, called diastema.
Investigators know a lot about his murder, the coldest of cold cases, since he was on (well, in,) ice until 1991, when global warming thawed him and he was discovered by two hikers.
Posted by Enzo