Omaha's ShotSpotter costs $65k to $90k per square mile per year and cops don't own the data, says Forbes. How effective is it? 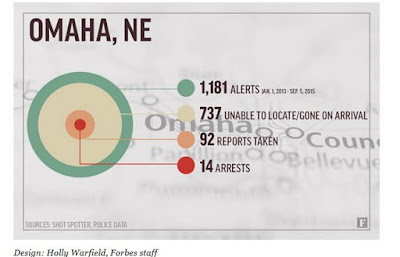 Police departments that subscribe to shotspotter don't own its data, which may explain why the Omaha Police Department doesn't (evidently) publish statistics on illegal gunfire in Omaha, numbers gun control groups in Nebraska would probably love to know.
Although the technology works quite well, Forbes says it produces "few tangible results" and characterized the company as "plodding along as it navigates a gun tech industry closely tied to law enforcement and beset with political pitfalls" and further noted that "Some cities are opting out of their contracts, using the savings to hire additional police officers and fund more traditional technologies such as surveillance cameras."
Forbes took a critical look at ShotSpotter in an exhaustive and painstakingly researched 2016 piece published here. An excerpt:


...Creating a blueprint for success when traditional crime measurements are missing isn’t easy. One way Clark has done this is by tightly limiting access to ShotSpotter’s data, while at the same time highlighting anecdotal success stories from key customer cities. “Sometimes,” Clark explained, “the things that are most impactful are the most difficult to measure.”
To see what could be measured, FORBES obtained ShotSpotter data and supporting records, including public contracts and maps of existing systems, from dozens of customer cities. ShotSpotter has aggressively fought the release of this information in response to both state and federal Freedom of Information Act requests. The company sent out a nation-wide memo to customers last summer, urging cities to issue blanket denials to such requests or disclose heavily redacted information, “in a form that would not harm SST’s business and allow the customer to respond from a public goodwill point of view.”

In a fawning local TV report aired in January, which could have been issued by ShotSpotter's PR people, WOWT quoted OPD Captain Scott Gray maintaining that the overall number of gunshots in Omaha has been steadily decreasing since ShotSpotter was installed four years ago.
Aside from begging the question of whether gunshots have been reduced in areas not monitored by ShotSpotter, Capt. Gray neatly skirted the issue of whether the gizmo actually reduces gun violence by putting perps behind bars. Said Forbes:


While officers are responding to more illegal gunfire, they rarely catch the shooter. And evidence that could be used to build a case and bolster a prosecution--such as shell casings left behind or witness testimony--isn’t often attributed to ShotSpotter in police or court records. The question now is whether the technology is worth the millions of dollars it's costing taxpayers each year...