The Nebraska Family Alliance (@NebFamily) really has its claws out for Senator Adam Morfeld's LGBT equal employment bill, LB173, attacking it in a podcast for the second consecutive week.
This time, they chatted up Kellie Fiedorek, one of several ADF attack dogs "national experts" who fly around the country testifying against bills which seek equal treatment of LGBTs. (AKSARBENT did a WHOLE POST about Fiedorek's Traveling Bullshit Roadshow, yes we did!)
@NebFamily is on a mission to convince its patsies listeners that legalization of gay marriage and fair employment laws will bankrupt Christer florists or cake decorators who refuse to sell gay couples matrimonial stuff because that would make them "participate" in gay weddings. even though such refusals are regulated by nondiscrimination statutes affecting public accommodations, not marriage or employment laws like the bill Morfeld is proposing.
In the service of the above mission, @NebFamily relentlessly repeats its version of The Crucifixion of Baronelle Stutzman, that nice grandmother florist nailed to her cross by Washington State and Big Bad Gay. They want you to believe she's a martyr. You can, if you wish. Or you could read this.
It's not all gay fear and loathing, though! @NebFamily often interrupts its horrifying tales of homosexual legislative predation to remind listeners of the good news (Have you heard the Good News, friend?)— that being that @NebFamily's dark tales of pervert political manipulation are sponsored by Walker Tire and The Bill Black CBS Home Real Estate Team!
So, if you can't stand homos and think they're sneaking anti-discrimination laws through legislatures in order to financially ruin Gay-fearing Christians who wouldn't hurt a godamn fairy, be sure to visit Walker Tire for all your vehicle needs and and list your home with The Bill Black CBS Home Real Estate Team.
Also, watch Fox News, whydoncha, ya rummy. 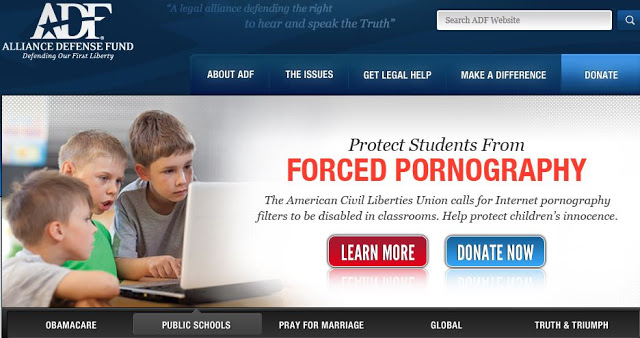 The Nebraska Family Alliance's friends at ADF (a far right legal outfit which used to stand for Alliance Defense Fund and now stands for Alliance Defending Freedom) once launched a nasty, dishonest Internet campaign against the ACLU's Don't Filter Me campaign.
That ACLU initiative sued right-wing public school administrators who used software to block gay students from accessing NONPORN antibullying gay websites like the Trevor Project and the It Gets Better project while allowing access to Christian antigay websites which purported to "cure" homosexuality through aversion "therapy" (frequently employing electroshock "treatments.")
The ACLU suit had nothing to do with porn filters, per se.
In 2013, an ADF attorney, Lisa Biron, was slapped with eight felony convictions of manufacturing child pornography featuring her daughter.
@NebFamily also interviewed Jonathan Alexandre, Director of Public Policy for Liberty Counsel!


Mr. Alexandre shared with the Judiciary Committee during LB173’s hearing, how from his perspective as an African American, comparing the plight of the LGBT  community today to that of the black community before the adoption of civil rights, is simply offensive and untrue.

Never heard of @NebFamily's fellow wackos at the Liberty Counsel? Well, HRC, the big gay lobby, has a big gay dossier on these nutballs! Here's a SMALL part of it:
As for the contention in @NebFamily's podcast that comparing black and gay oppression is "offensive", we'll leave you with the trailer for Best Picture, 2017:

Again, we remind you that The Nebraska Family Alliance's interview with the radically antigay ADF and Liberty Counsel was sponsored by Walker Tire and The Bill Black CBS Home Real Estate Team.
Like this post? Share it via social media icons below.